From the minute the wheels of the plane touched down, we experienced one of the hallmarks of Dubai’s development, taxiing forever in what will the be the world’s largest airport.

We were in the UAE to visit my friend and former UPenn housemate Katie who recently moved to Abu Dhabi from Washington, DC with her fiance Ben. Lucky for us Abu Dhabi happened to be right en route between Turkey and Nepal. While we did and saw a lot, what was most memorable and what we were most looking forward to was seeing good friends. 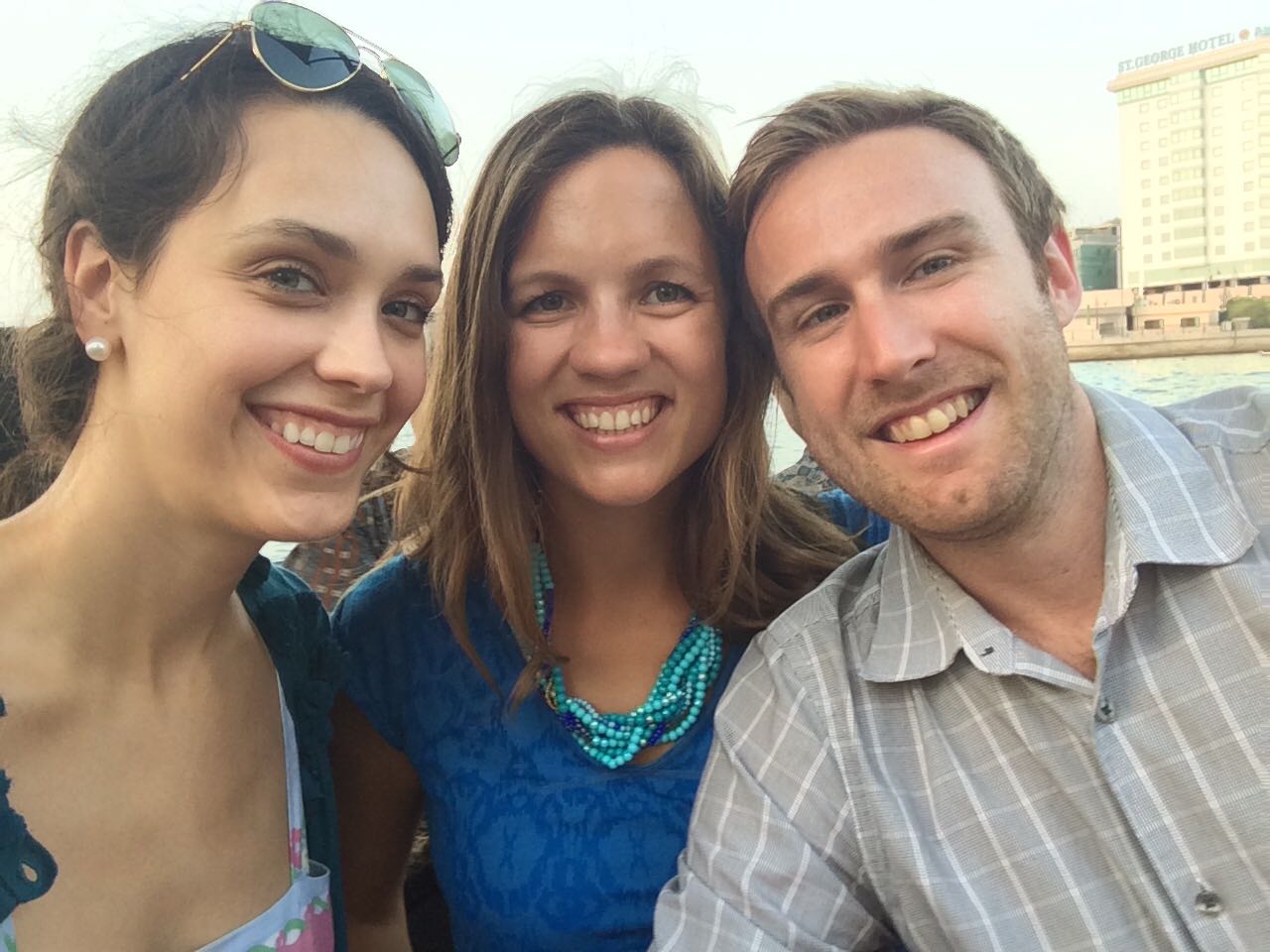 Dubai is only an hour and a half from Abu Dhabi, and we met Katie there for a day of (jetlagged) exploration, taking a little boat across Dubai Creek and wandering around the market. The Dubai Museum was surprisingly interesting for a city that literally did not exist 60 years ago. 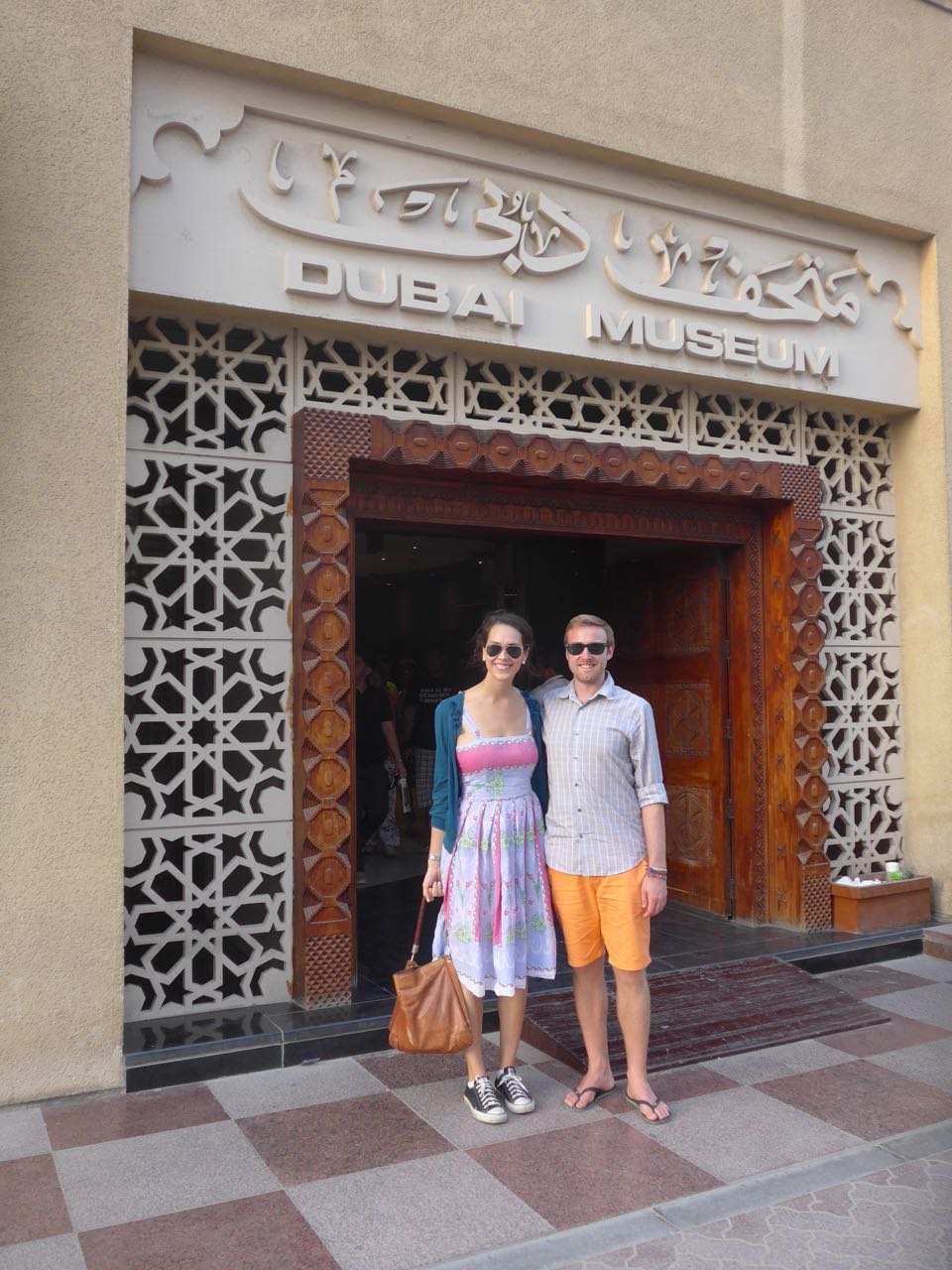 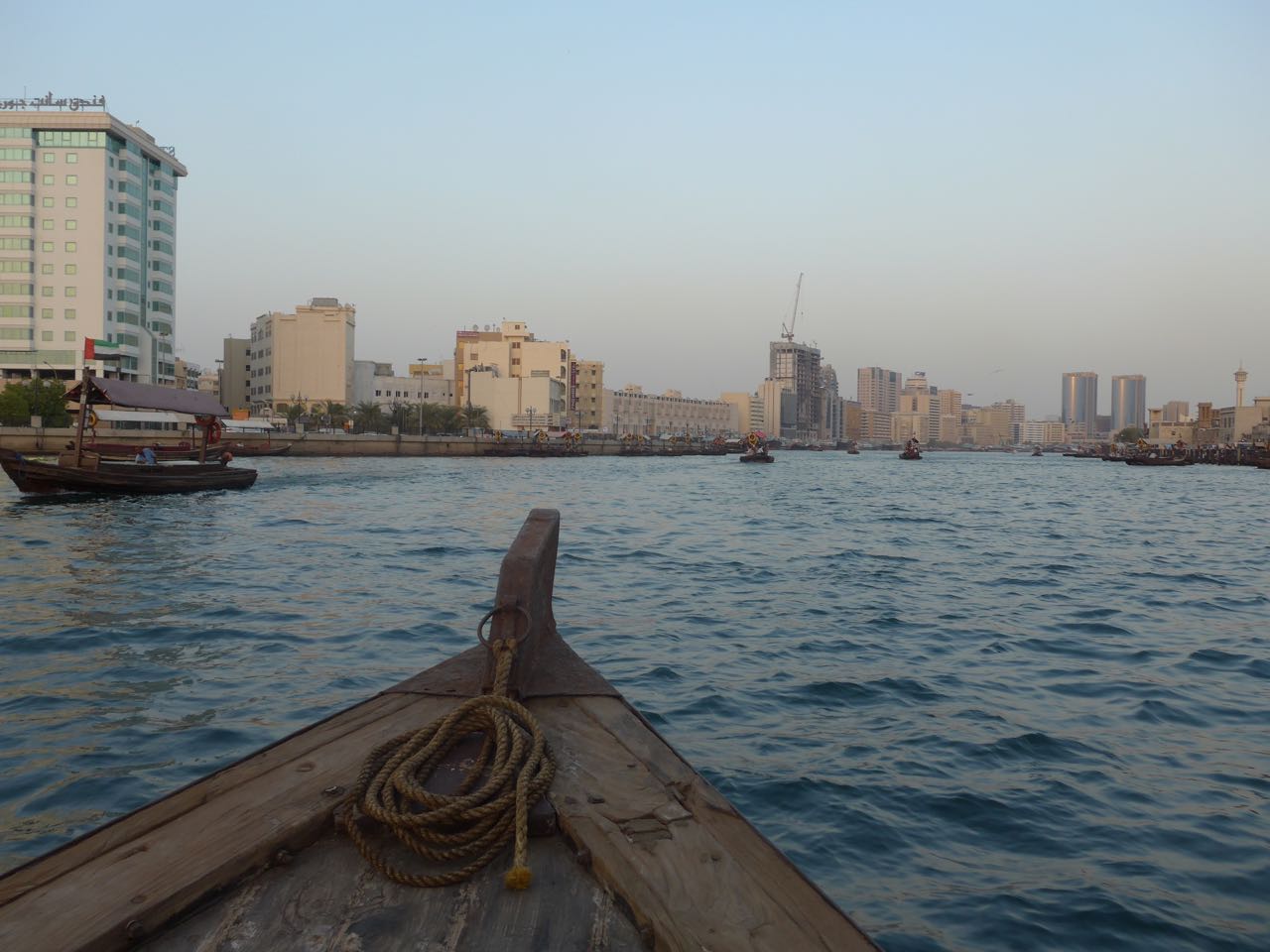 In the evening, we took a cab to the Dubai Mall where we watched a fountain show with the tallest building in the world the Burj Al Khalifa looming in the background.  We also found a statue by our favourite Colombian artist Botero – it’s a small world. Dubai is a place of superlatives, and we also checked off browsing in the largest shoe store in the world where the girls got free Christian Louboutin manicures. 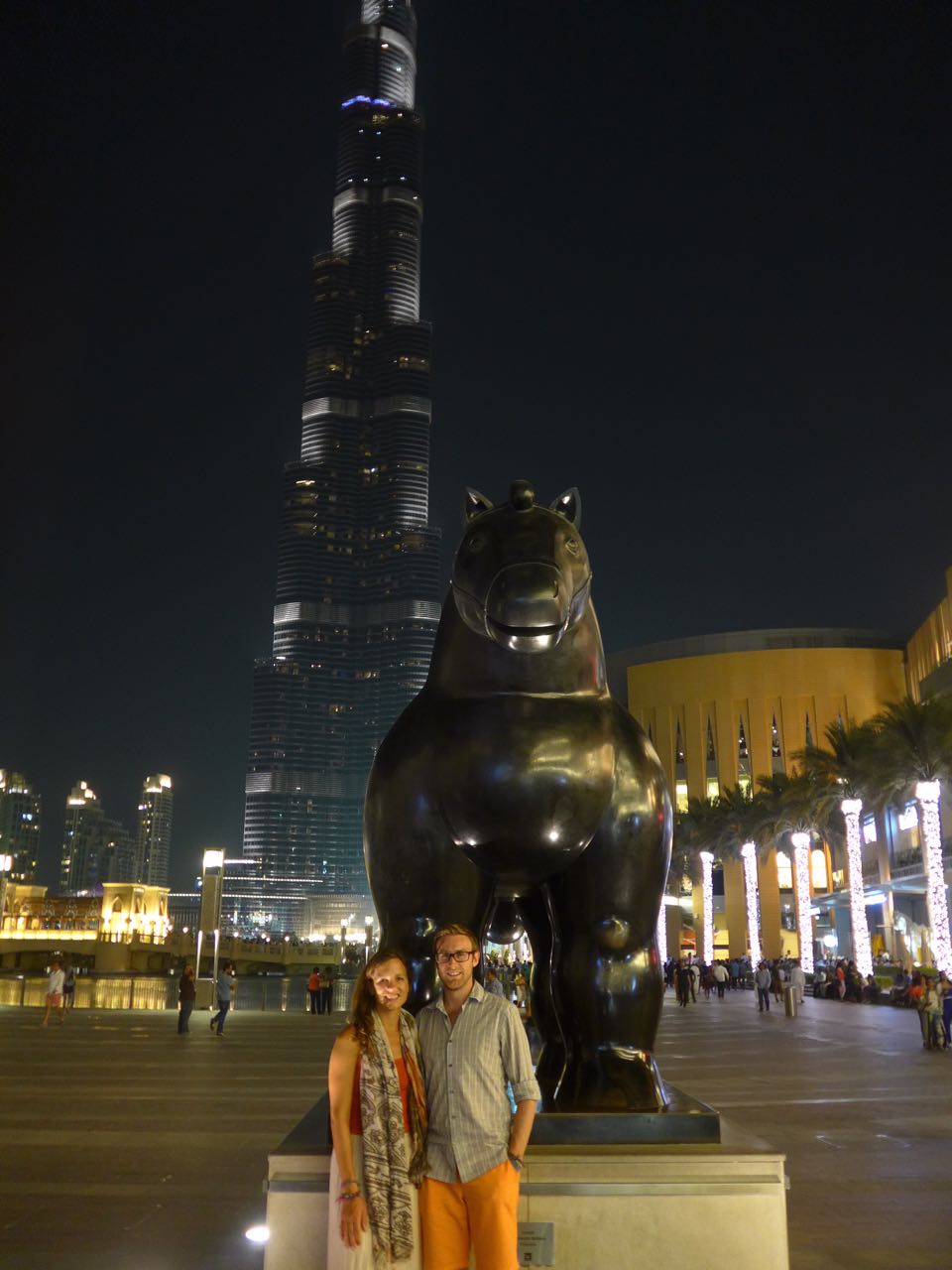 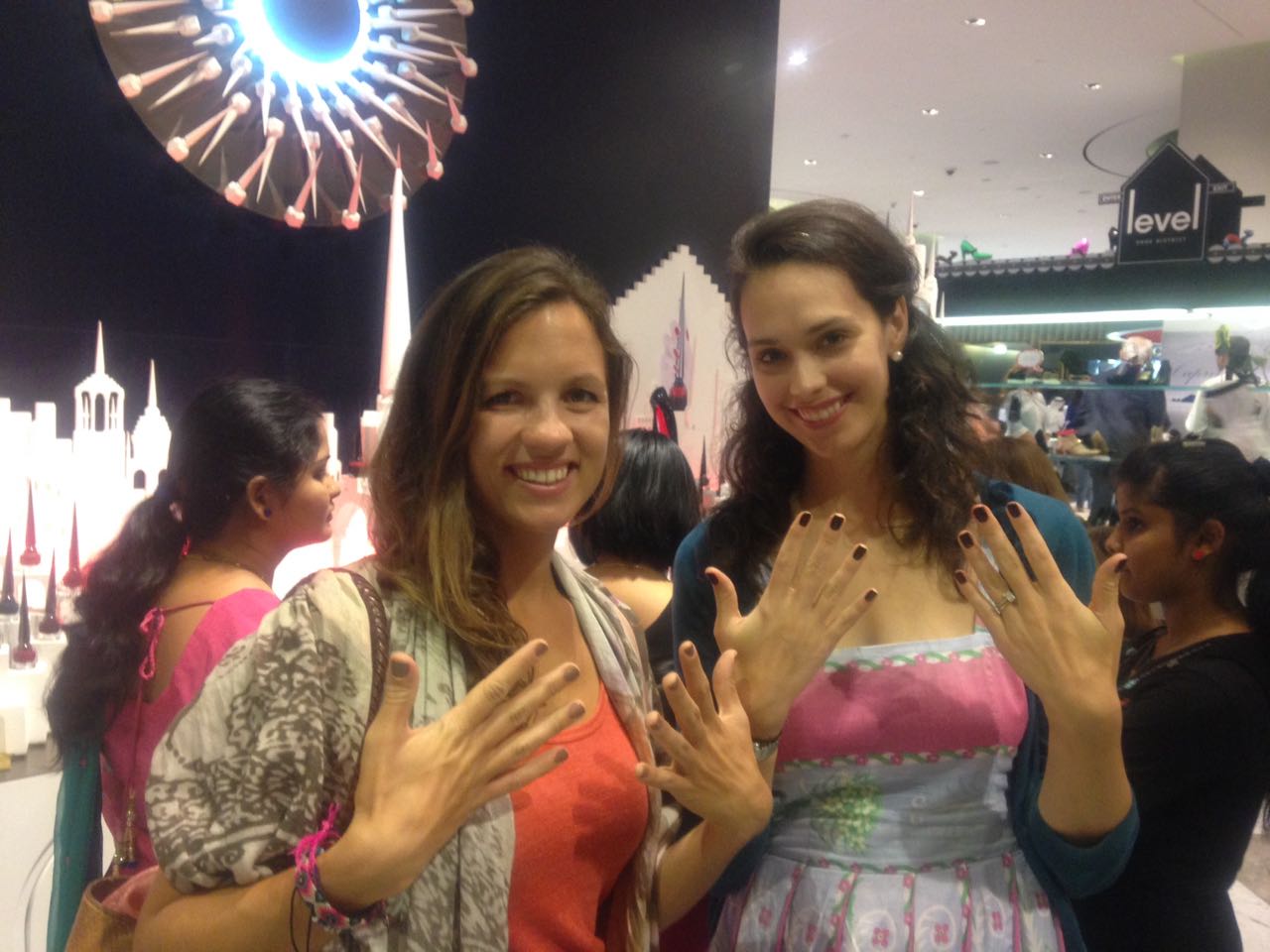 We almost bought a sour cream glaze donut from Tim Hortons, the first time we’ve seen it outside Canada! It seemed to be a big hit there. 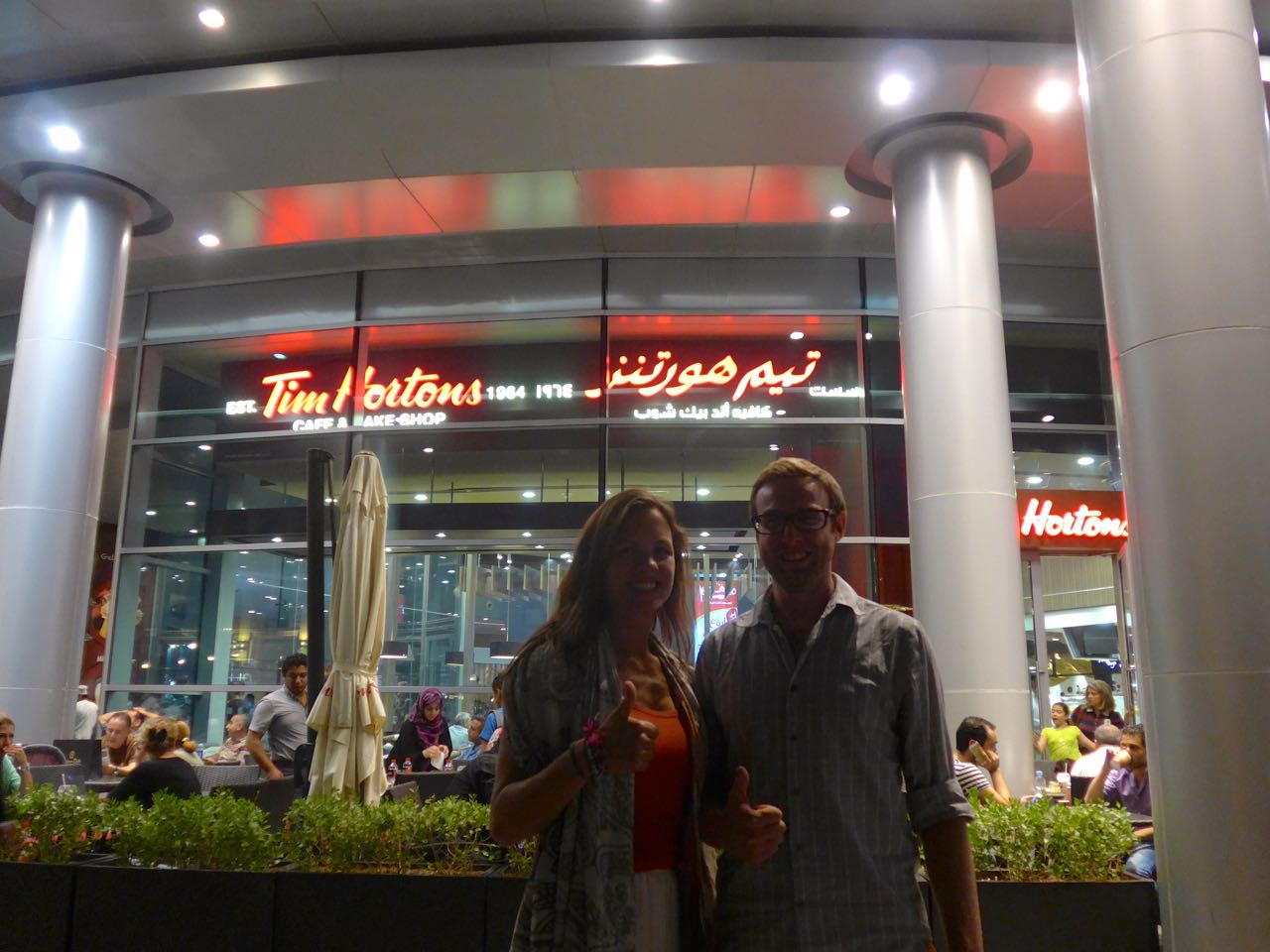 On the way back to Abu Dhabi, we made a pit stop to swim at the beach right beside the Burj Al Arab, otherwise known as the sail shaped hotel. The water was incredibly warm and salty, with lots of people out enjoying the beautiful weather. Which became a bit of a running joke, because it’s always good weather there! Hard for people from Vancouver to get used to. 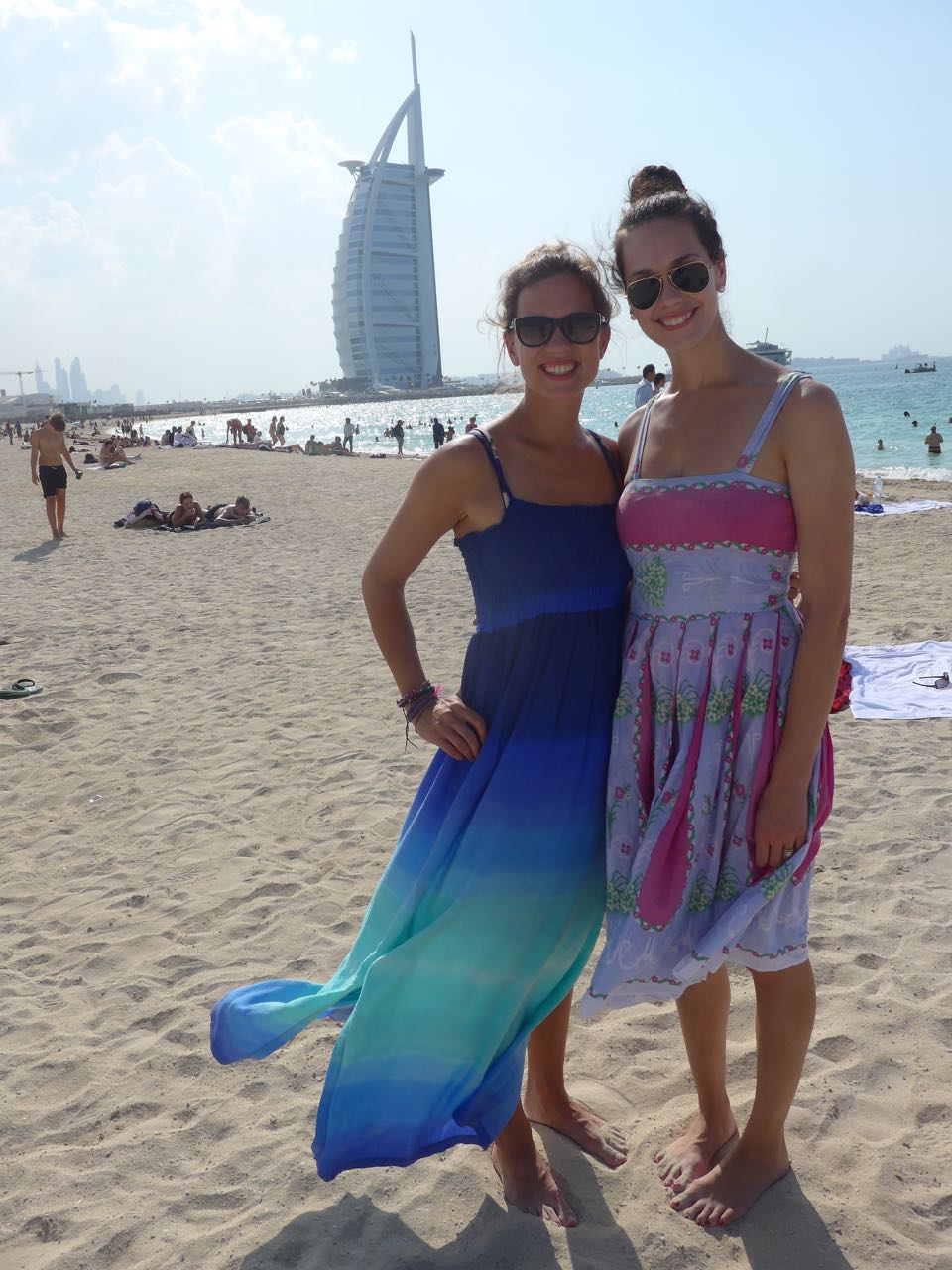 One of the most amazing sights was the brand new Sheikh Zayed Mosque, which may be the most beautiful and ornate building we have ever been in. They won’t put a price tag estimate on it since it is a gift to God, but it’s estimated to be in the billion plus range. The mosque is for public prayer and it’s nice that everyone can share and appreciate the beauty inside. Each wing has a unique design with tile work featuring flowers of a different hemisphere. And the chandeliers (one which was at one point the largest in the world) were incredible. 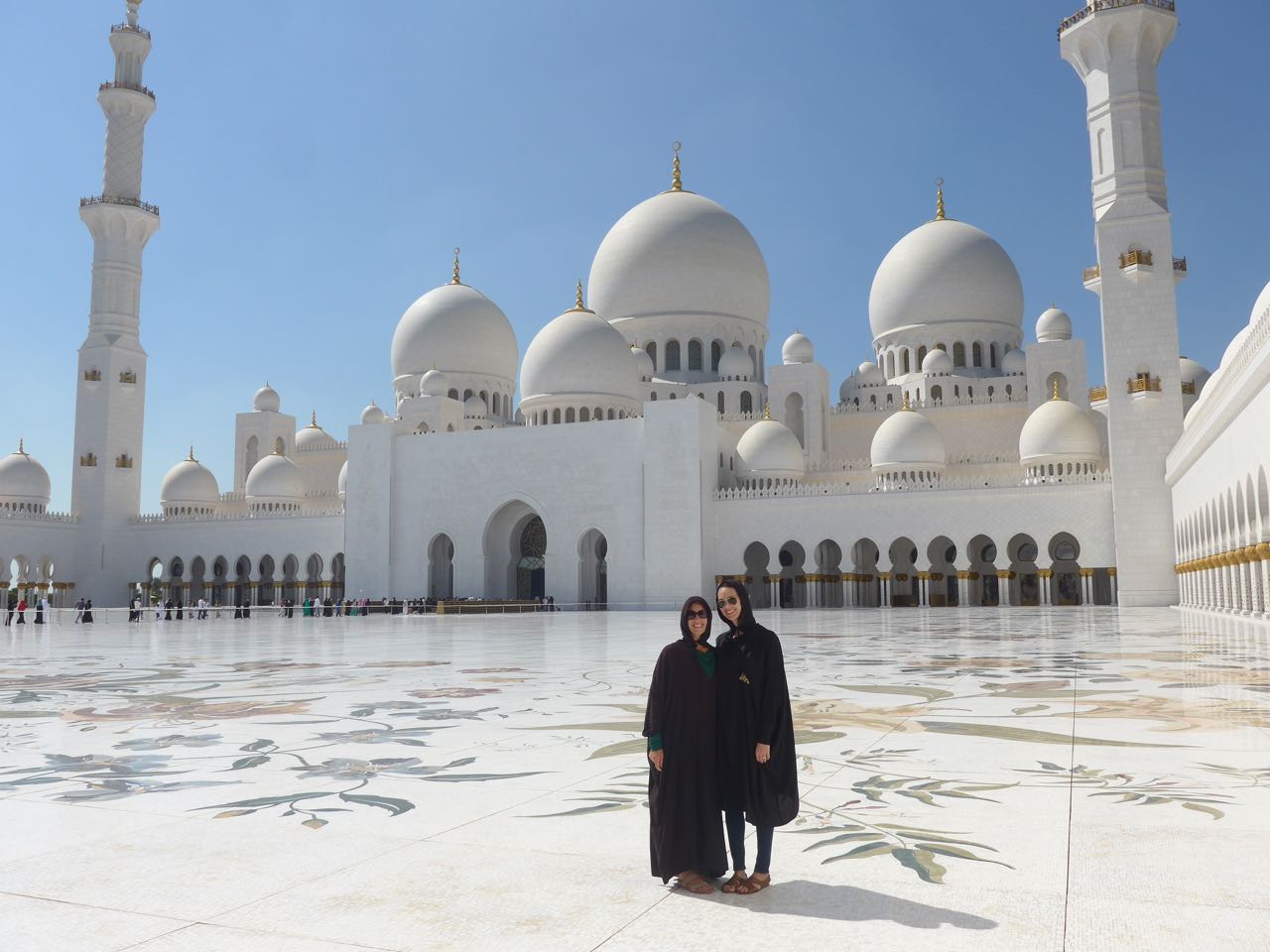 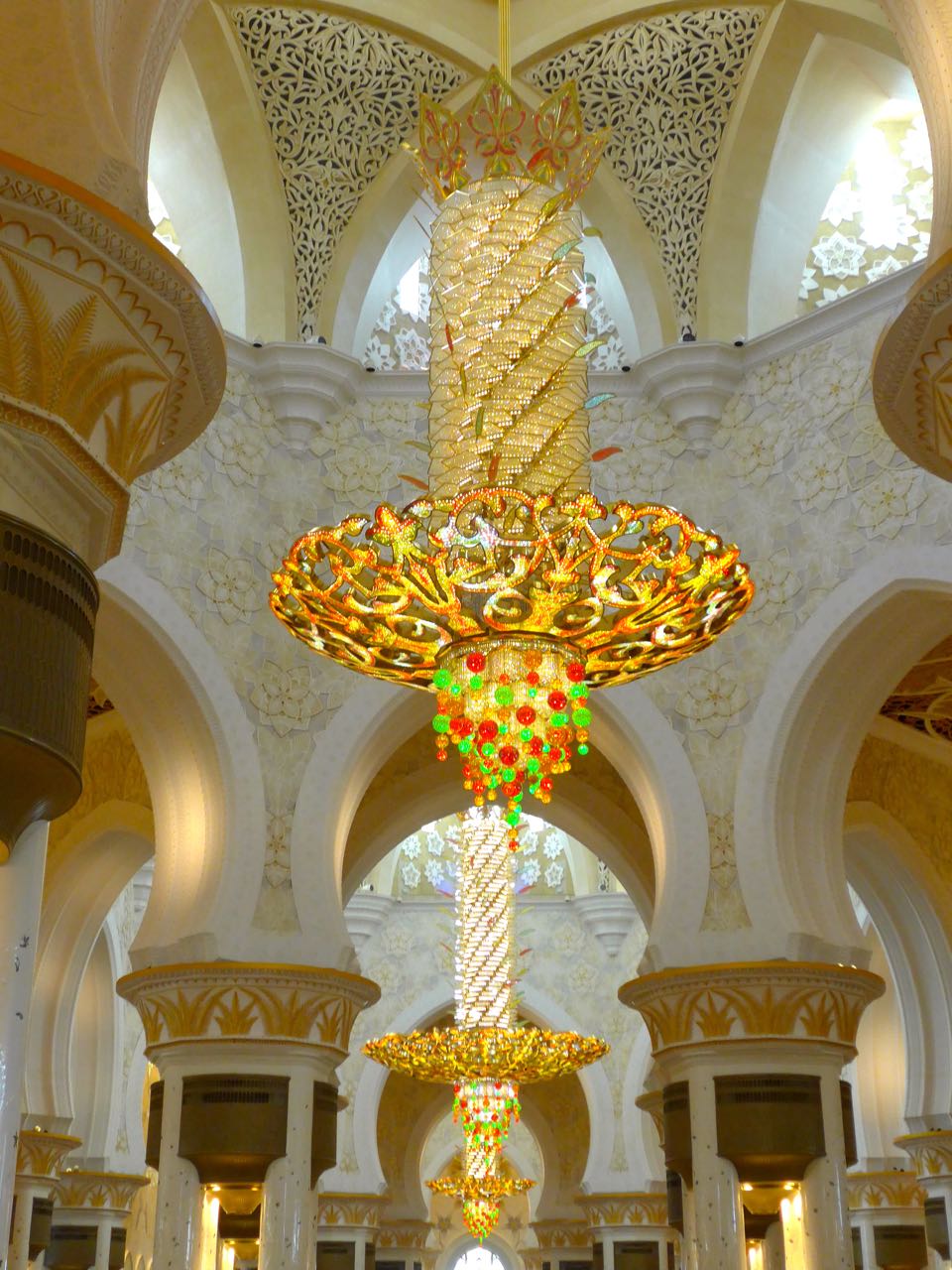 As the luxury capital of the world, we were a bit worried that our budget would be stretched to the limit. While there are countless opportunities to throw your money around (gold coffee, gold vending machines, 5 star restaurants, luxury stores in every corner), there was a lot of fun to be had without going bankrupt. We ate at some delicious ex-pat restaurants enjoying burgers, salads and everything that we will have a hard time finding over the next few months. We also did the local thing eating delicious Saudi fish and lamb on the floor. 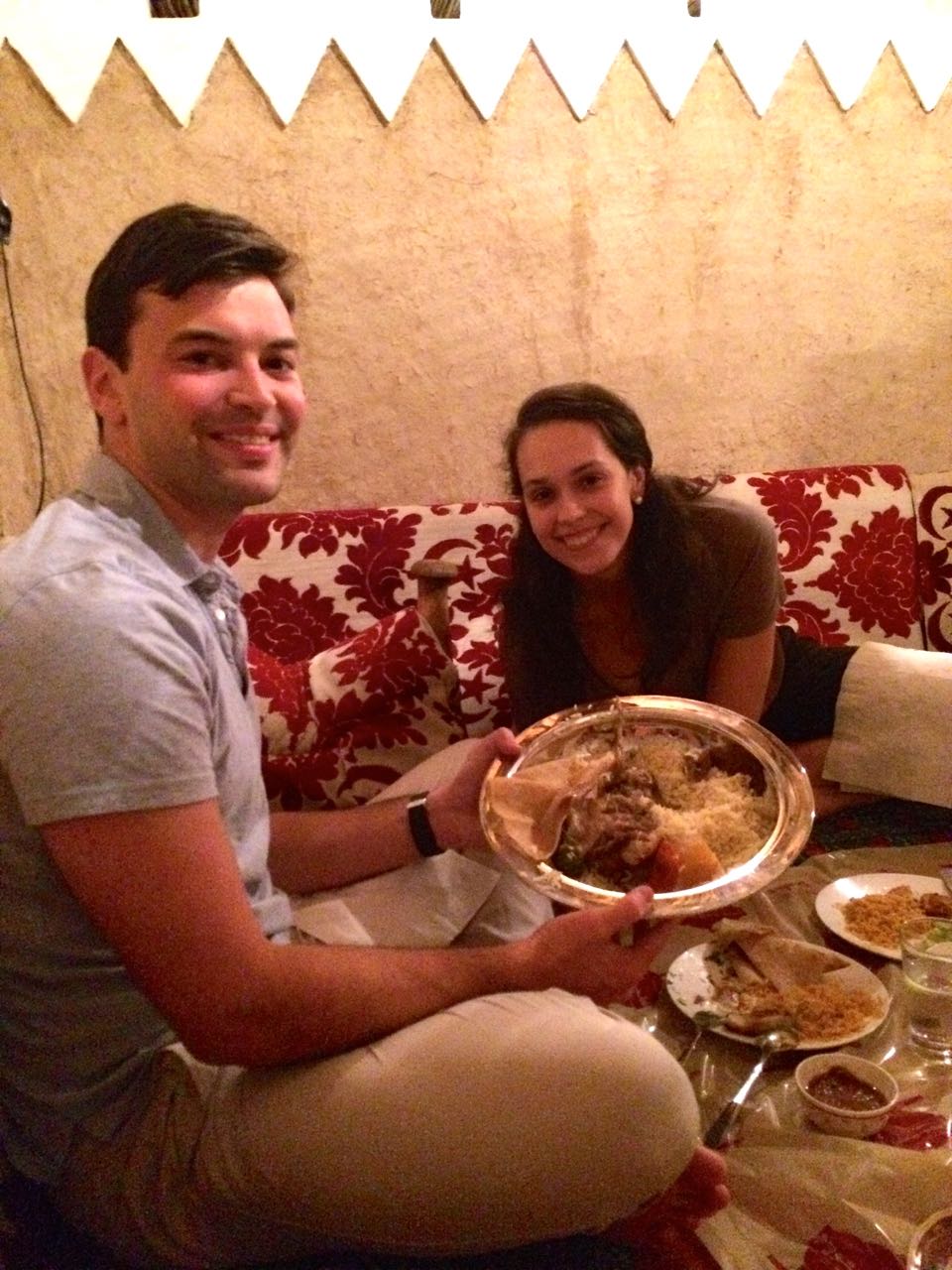 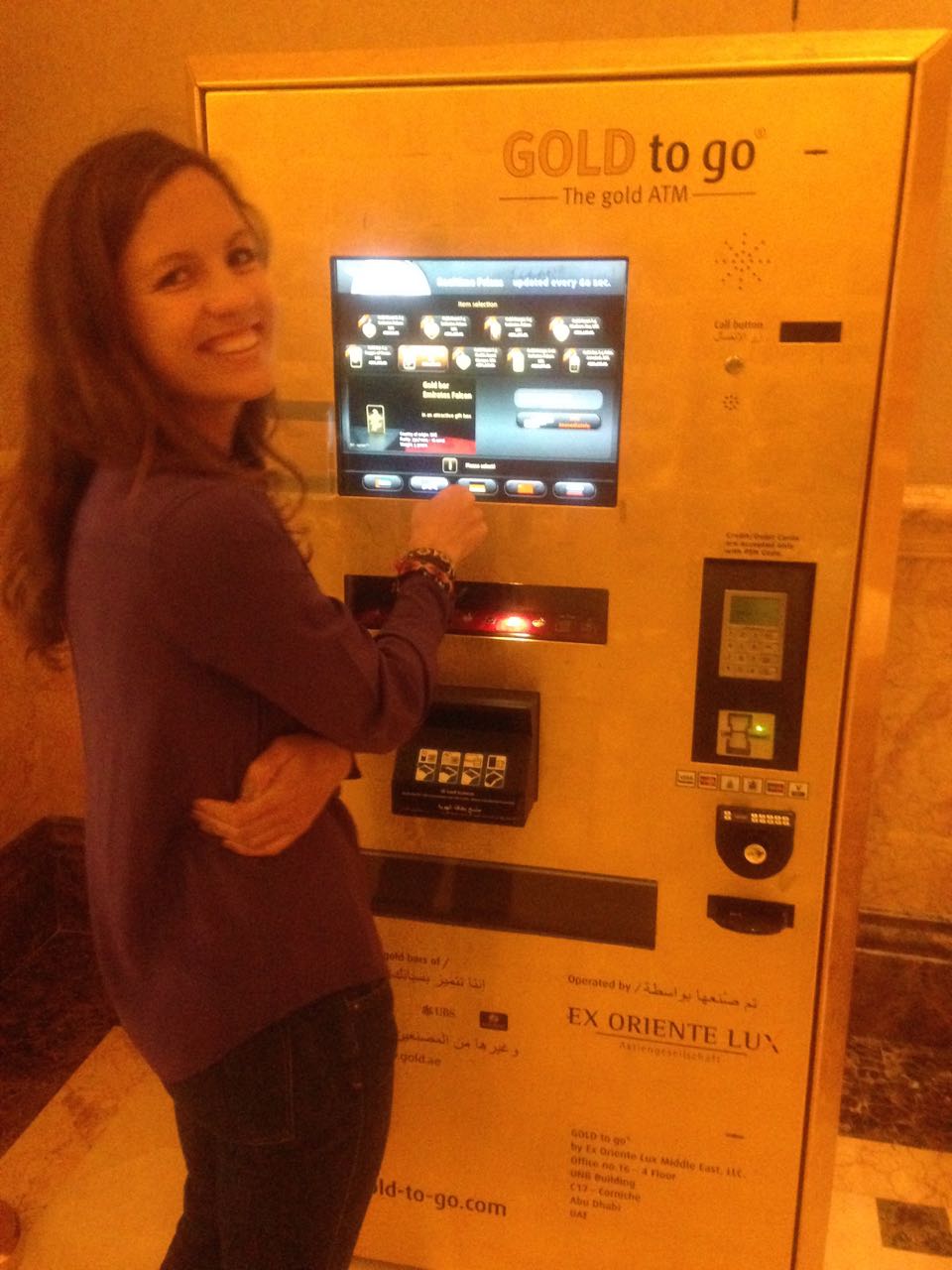 We couldn’t go to the UAE without checking out the desert. En route we went hunting for camels! And then we drove into the middle of nowhere, sand dunes rolling into the distance on either side, with a little resort emerging at the end where we gorged on local Emirati and traditional Arabic food. 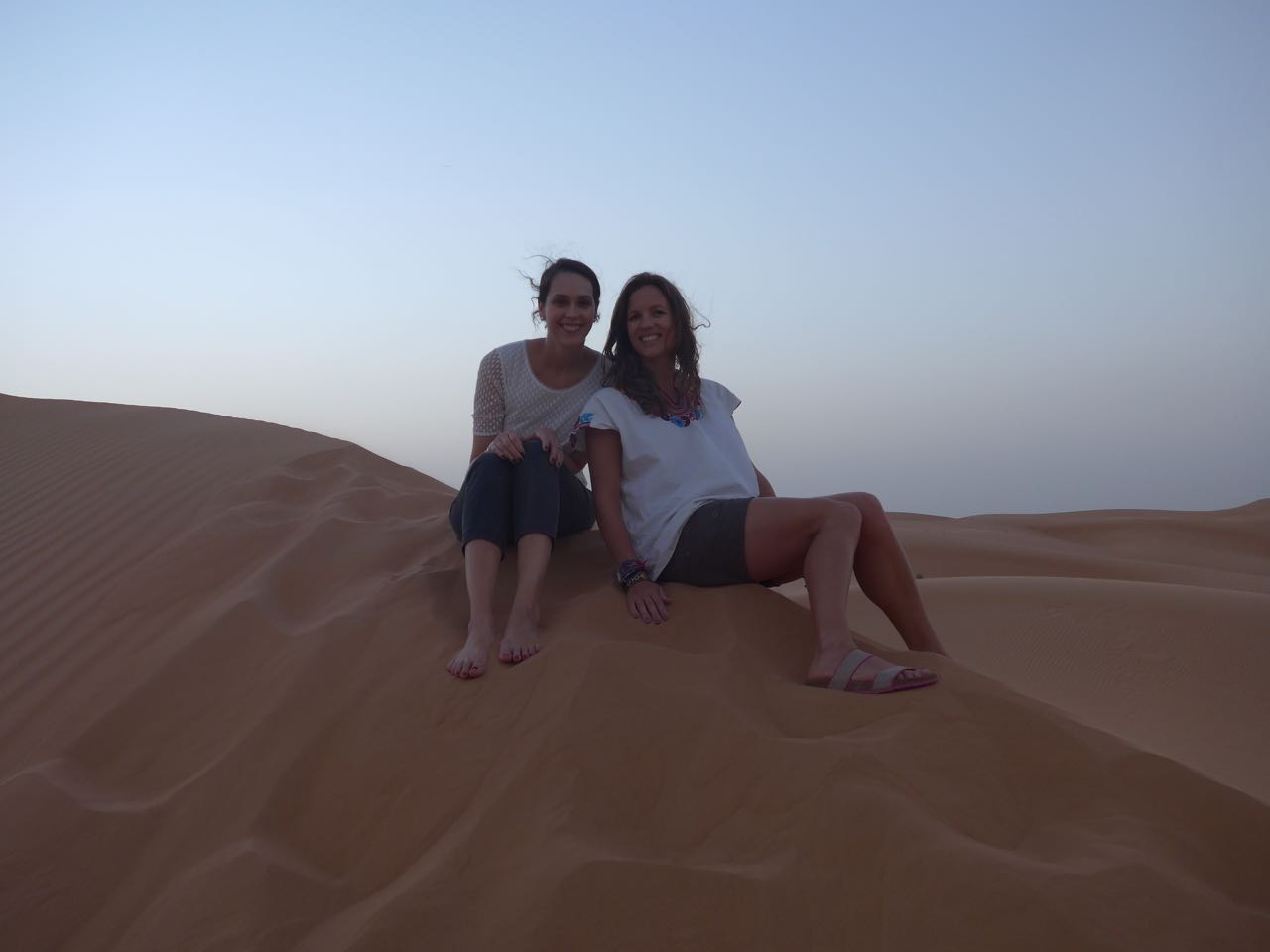 To cap off a great visit, we checked out what Ben (hotel guru) calls one of the nicest hotels in the world, the seven-star Emirates Palace. I didn’t even know you could get seven stars. Sitting on the beach with a beautiful breeze, hookah and a whiskey cocktail was heaven. 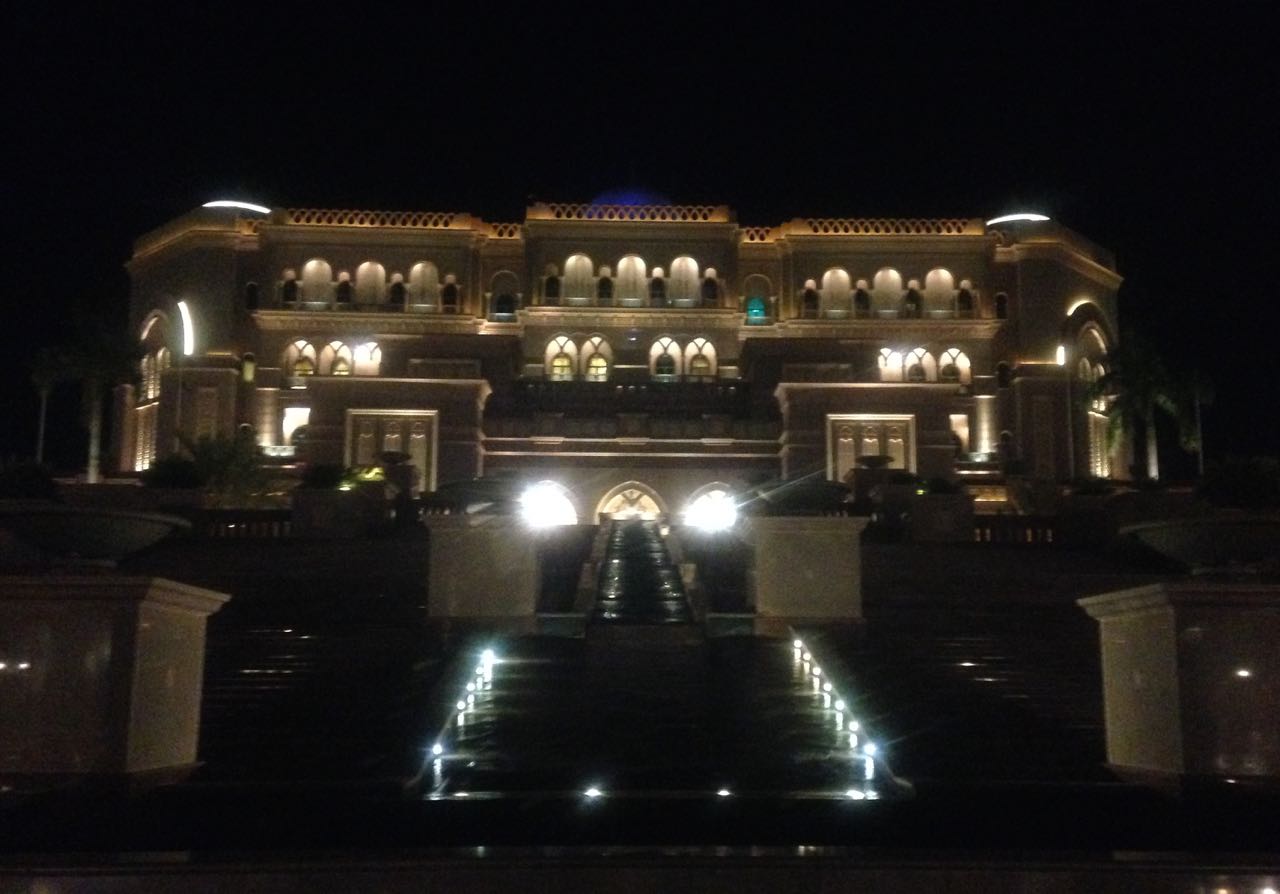 From what you hear in the news, I was expecting the conservative culture to feel more restricting. It was interesting coming from Turkey where we could compare the two Muslim cultures. Not to say the UAE was liberal, but Turkey felt more immersive in the Muslim culture. We only faintly heard the call to prayer in the UAE, which regularly jarred us awake at unnatural hours in the morning whilst in Turkey. Emirates only make up 10% of the population in the UAE, whereas in Turkey 99% of the population is Muslim. All of the Emirati women wear abayas of some sort, but while in Turkey they were plain black, in the UAE they would often be beautifully embroidered with lace with sky-high designer heels peeping out the bottom. The men also wear traditional style dress, sometimes made modern with an American baseball hat.

Thanks to Chomes and Ben for being amazing hosts – we loved seeing you and your new home.  Anyone else who makes it out to visit – you’re in for a treat!