Namaste translates into something like “the soul in me greets the soul in you”, and is the standard greeting in Nepal with people on the street, shopkeepers, and other tourists. But arriving in Kathmandu is not exactly a “namaste” greeting. When describing Kathmandu, the first words that come to mind are dirty, loud, and smelly. But kind of fun in a hectic, please-don’t-run-over-me-with-your-motorbike way? 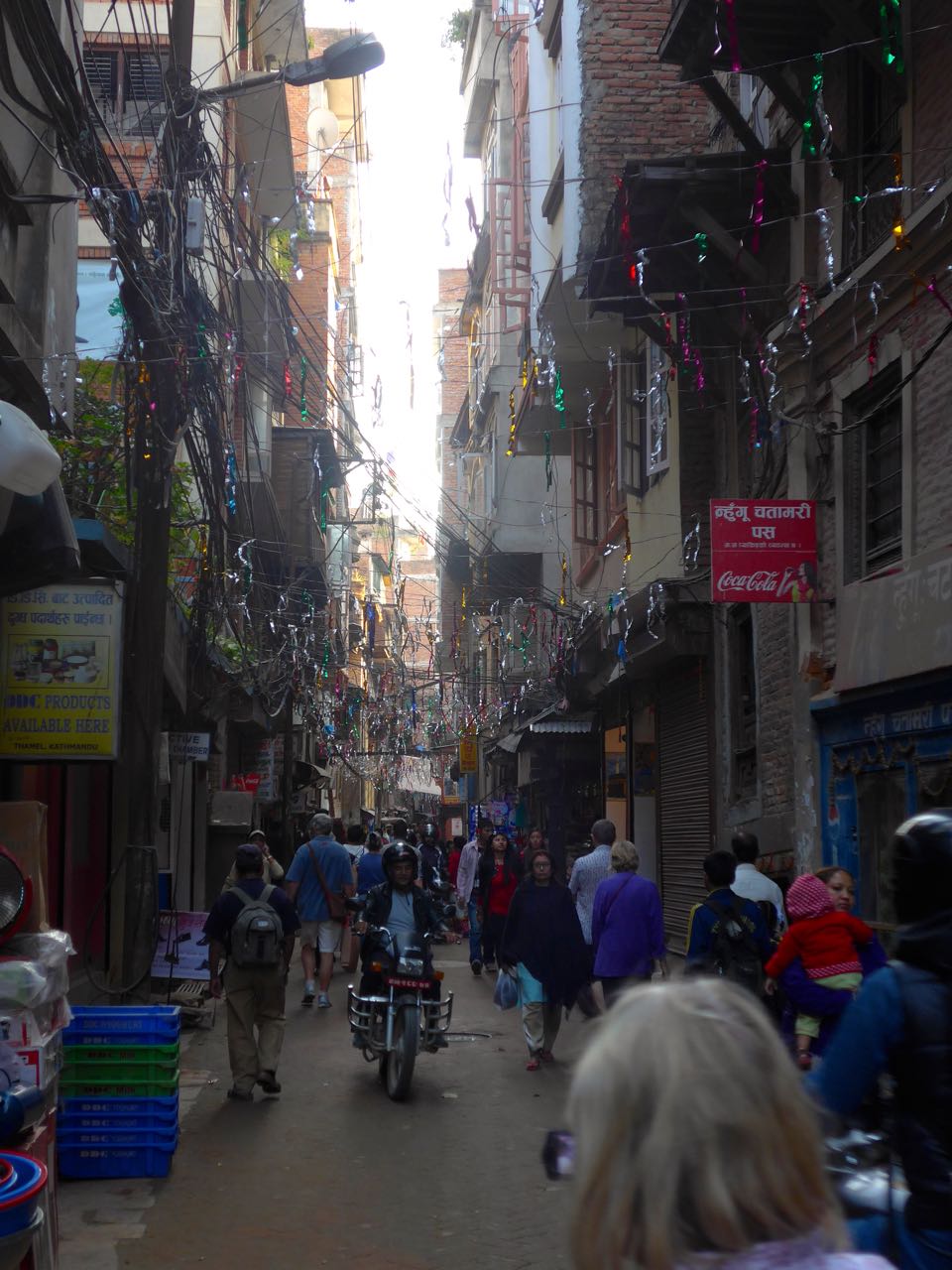 Our Nepalese taxi driver in Abu Dhabi overheard us discussing what we were planning in Nepal, and piped in to tell us he was from Pokhara. When we arrived in Kathmandu, we couldn’t imagine the culture shock he must have faced arriving in Abu Dhabi. The two cities could not be more different. If you read our post on Abu Dhabi, I’m sure you’ll agree. 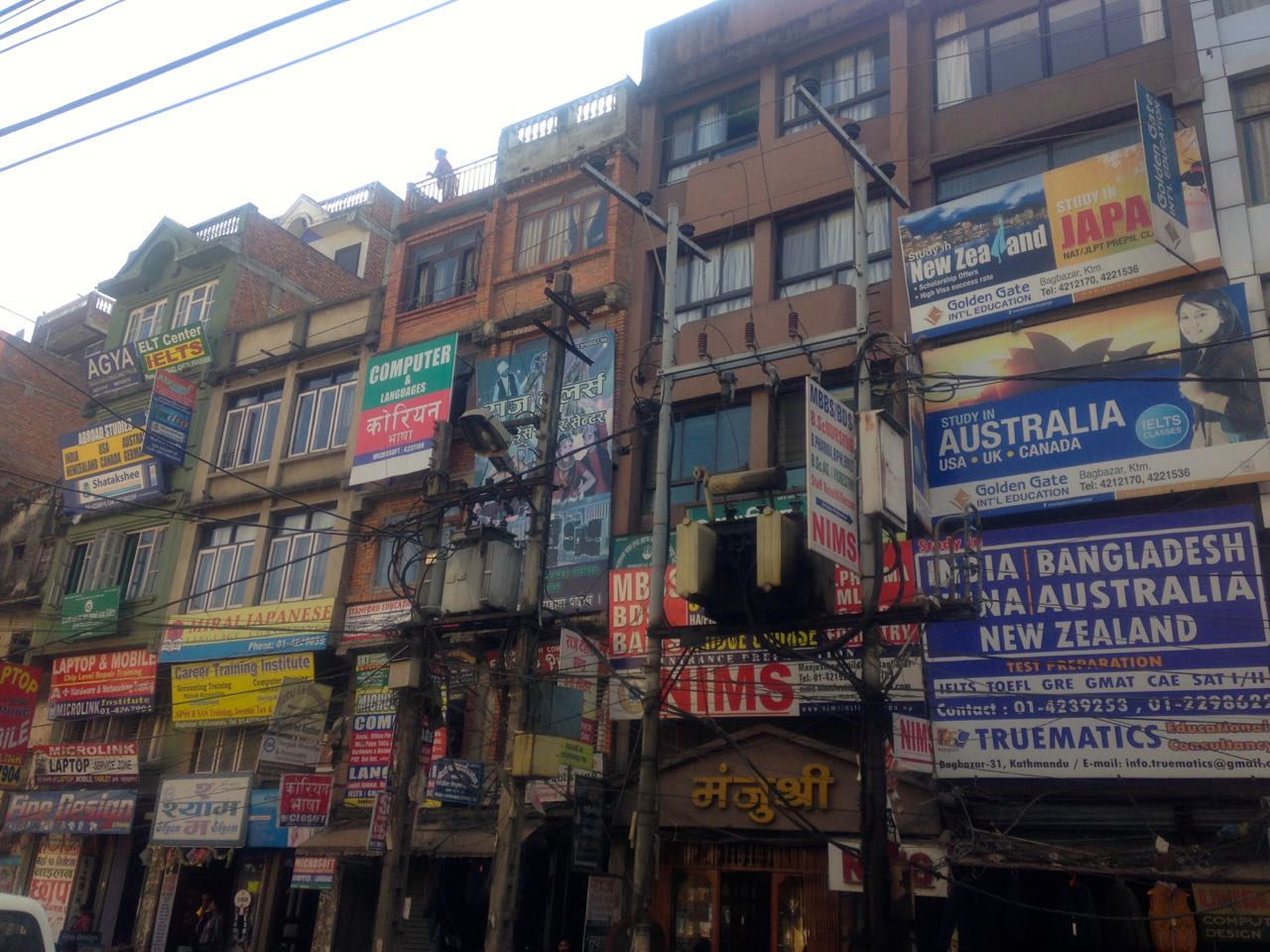 We arrived late at night after an eventful day of travel with a stopover in Dehli. We heard that Dehli had changed a lot in the last five years, and if the airport is any indication, it’s true. Filtered water fountains, no loudspeaker announcements, free electronics charging stations, comfortable seats… we couldn’t believe we were in India. And, as we learned, the airport has a good doctor.  It’s unlikely we will ever forget this one. Arriving into the terminal, I had a little yawn… that went on and on. My jaw would not close. While waiting for a doctor it seemed as if our entire flight walked by, gaping at me as I gaped back at them.  After about half an hour, the doctor was finally able to force my jaw back to its normal position with a reassuring crunch. And then I vowed never to yawn again. Having no Indian currency to pay my new hero his $5 charge (and no access to money changer/ATM), Sean gave an airline representative our leftover UAE currency so we could pay the good man.  Sorry, no pictures of that incident.

Our first day in Kathmandu we sourced all the warm weather clothes we would need for trekking, vowing to be prepared in case of sudden weather, with Nepal’s October trekking disaster fresh in our minds which you probably read about in the news. And then we had time for the fun stuff, exploring the main square was exhilarating – so many colours.  It was one of the only two times we will get to see the Hindu culture on this trip, so we tried to soak it all in. 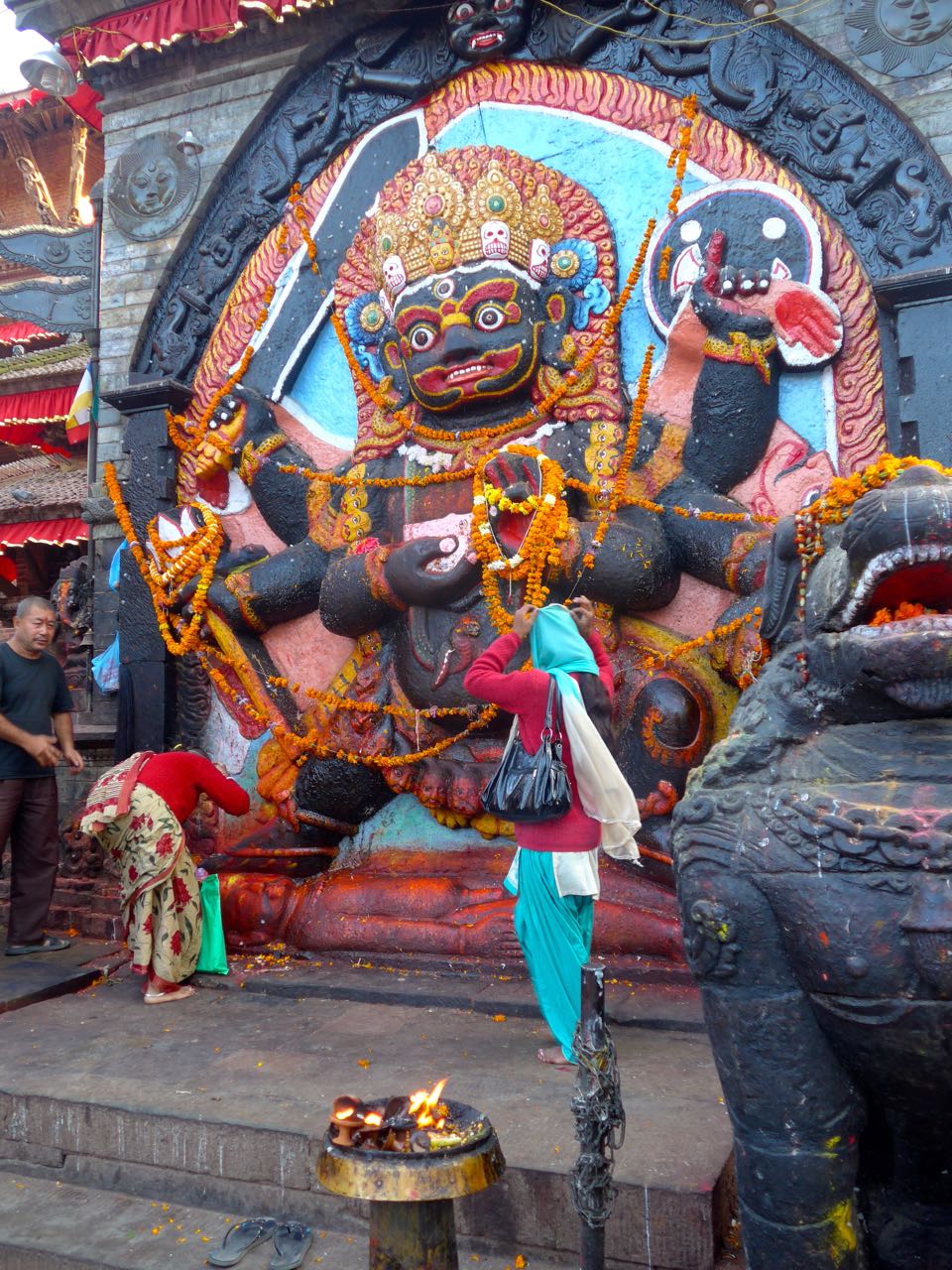 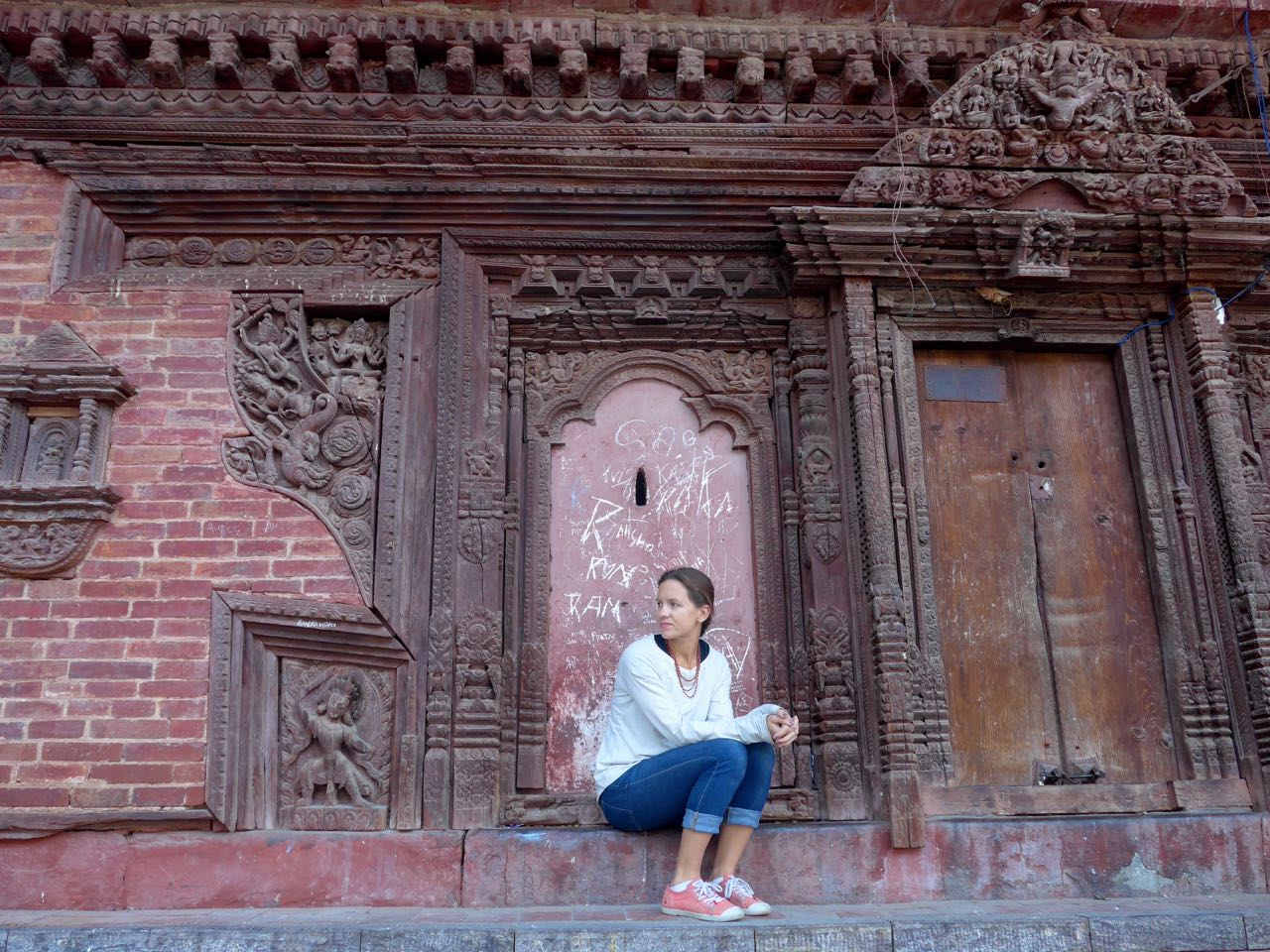 Probably the most different sight to two Canadians was the ghats, where bodies are cremated in a very public ceremony at the site of Nepal’s holiest Hindu temple. Statues and temples are jumbled together around the river, which eventually flows into the River Ganges. 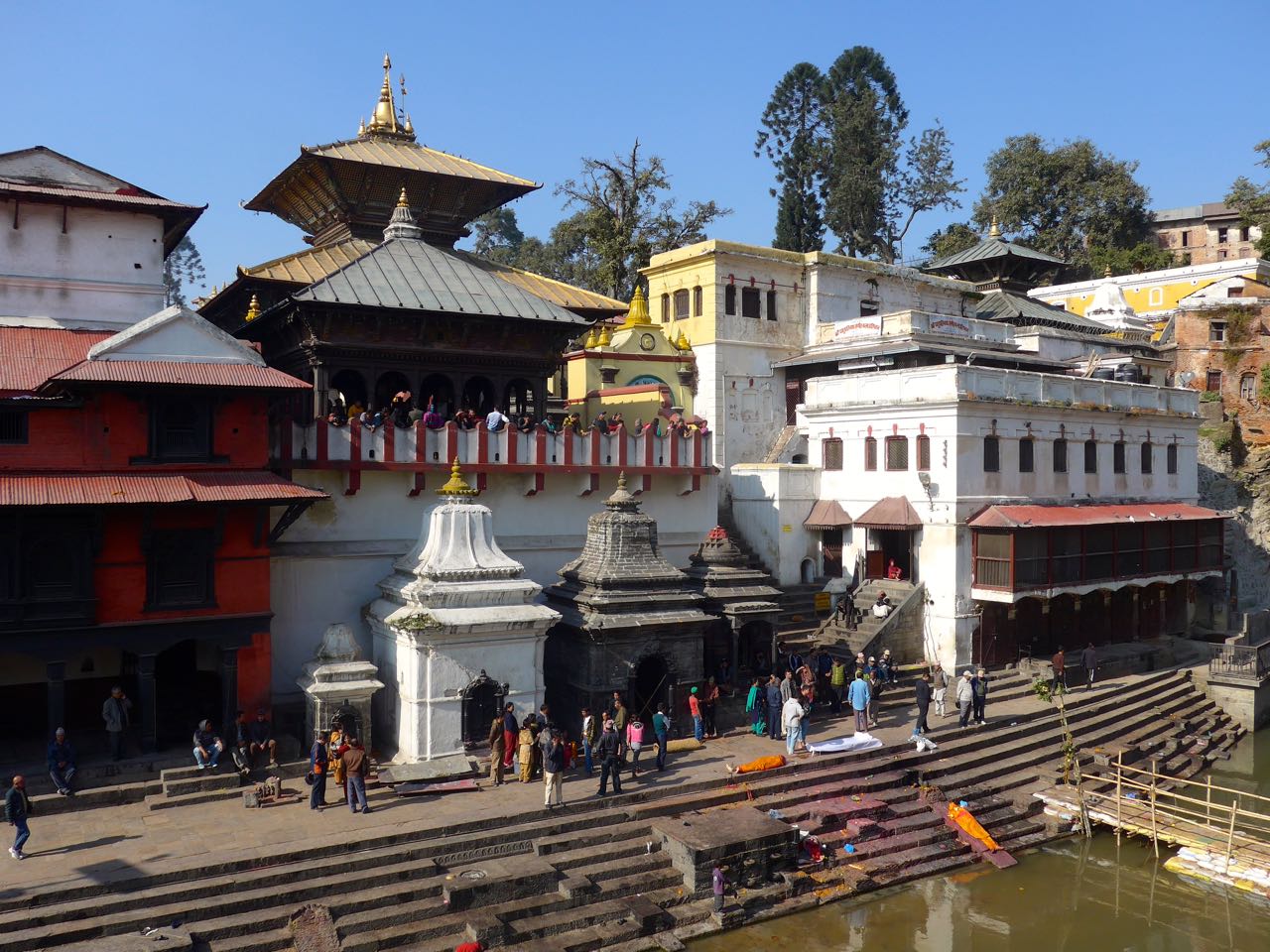 We feasted on the sight of the world’s largest stupa from the vantage of a lovely balcony over lunch. 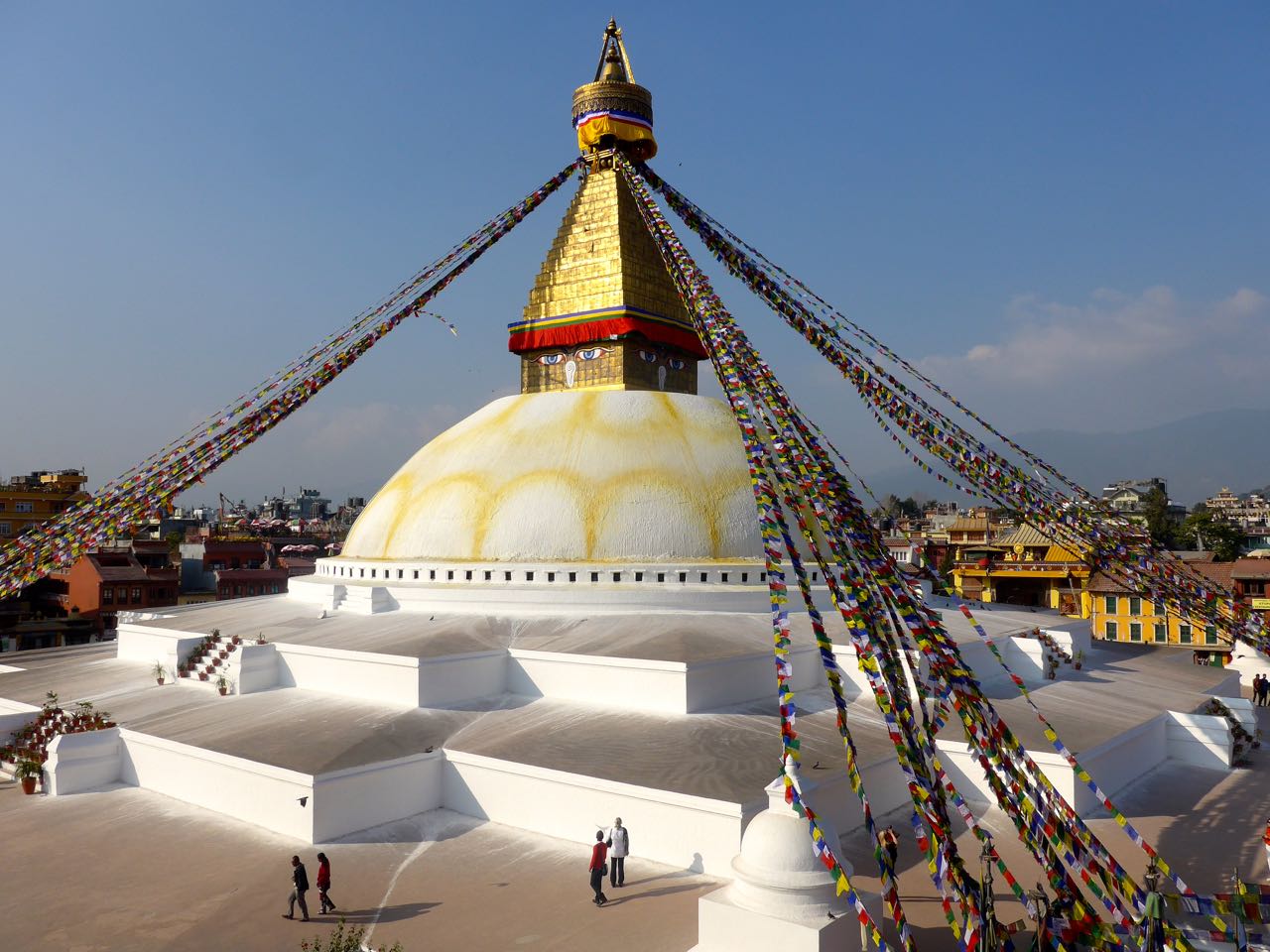 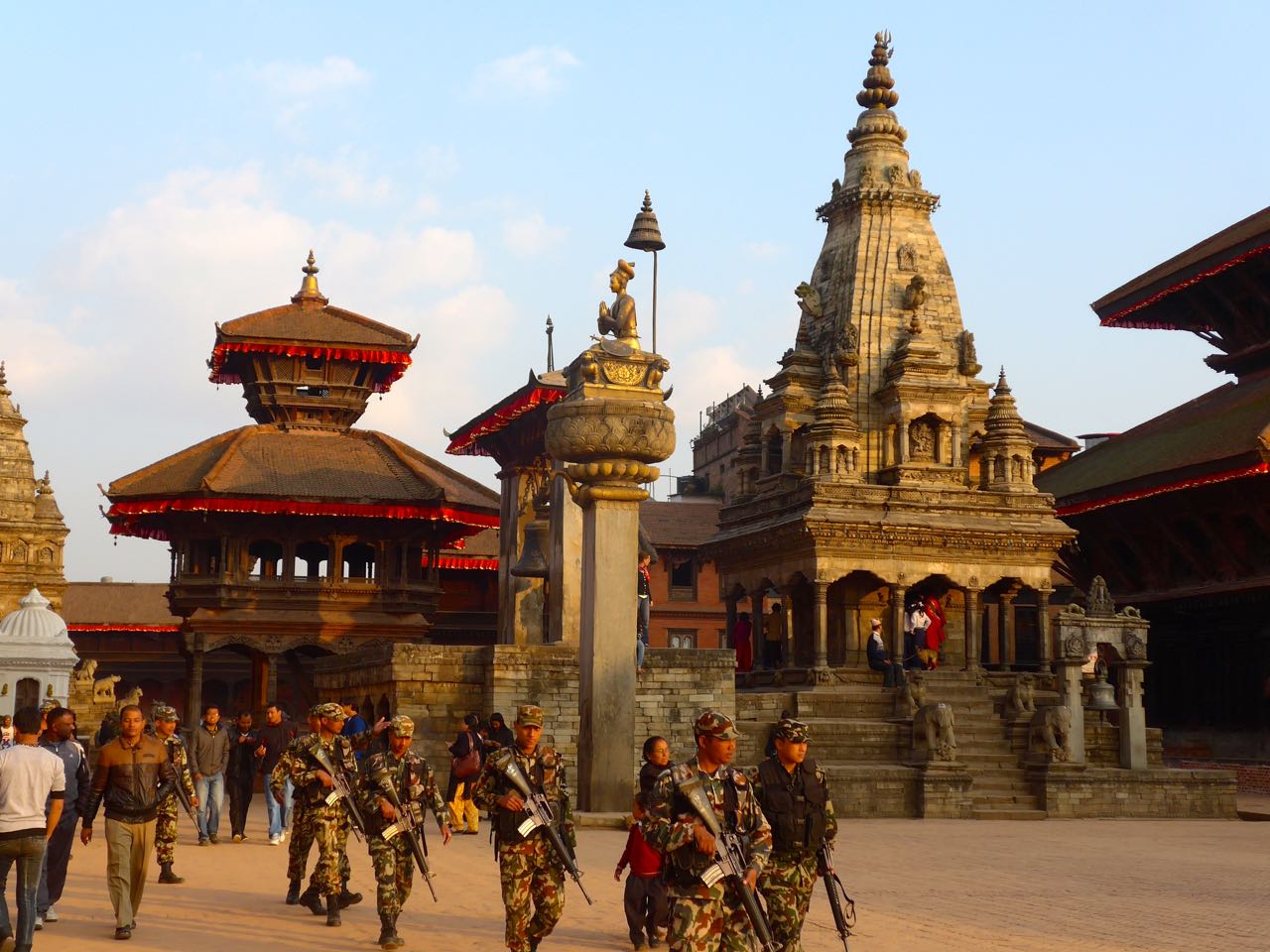 We were told it would take 8 hours on the bus to Pokhara, where the trekking starts.  At first we didn’t believe the bus time estimate, given the fact it was only about 180 kilometres.  Once we were on the road averaging 30 km/h, we immediately understood why it took so long.  You have to pass vehicles like this. 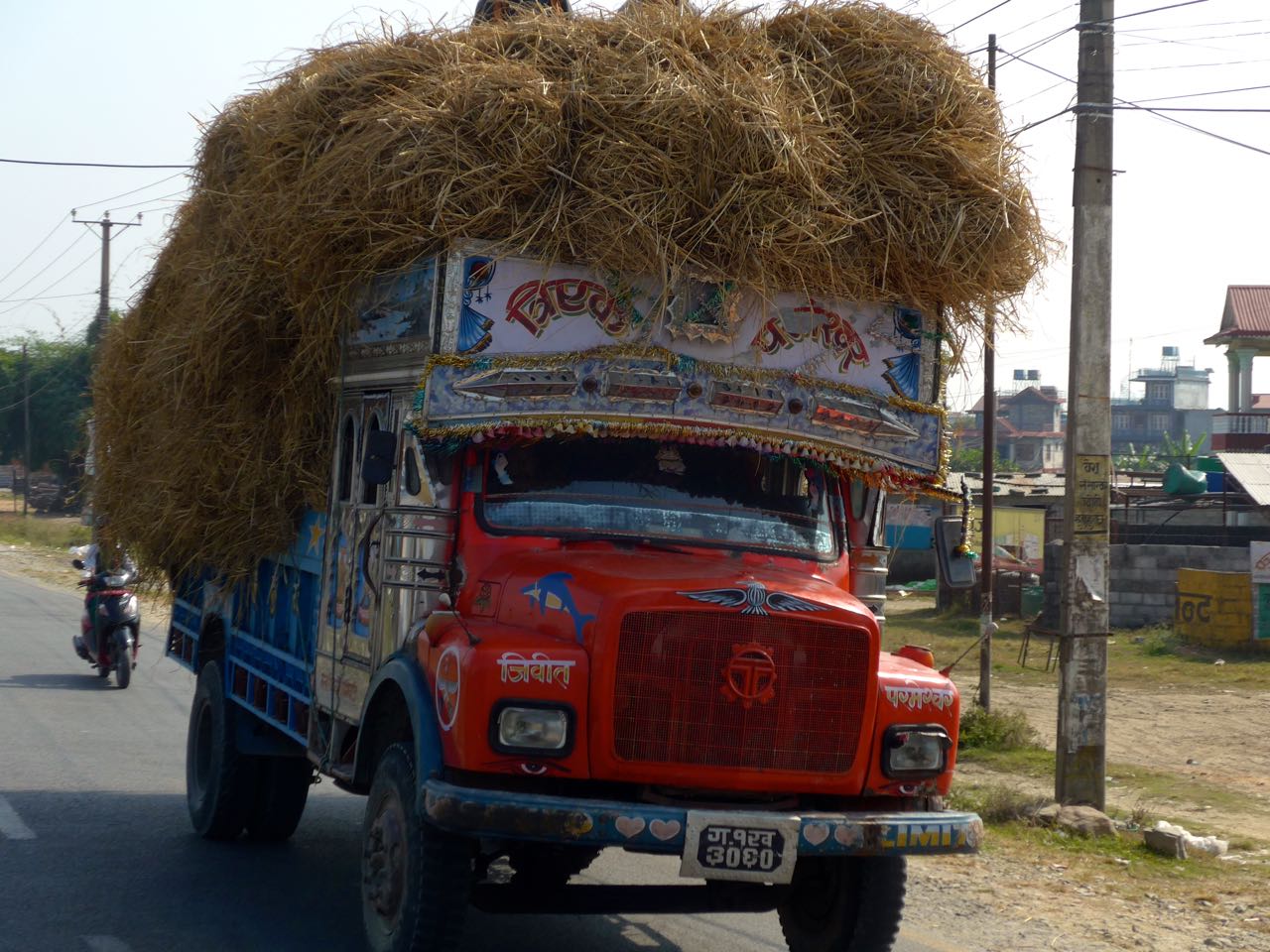 Pokhara is a little haven for Western tourists, which is kind of necessary in Nepal. Definitely for Cami, since we’ve learned she has what we now call a “butterfly stomach”. Sanitation just isn’t something that is practiced by most in Nepal.  Nepalese people continue to be very nice, and our guesthouse owner knocked on everyone’s door to let them know that we could see sunrise on the mountains from our rooftop.  Thanks, I think? 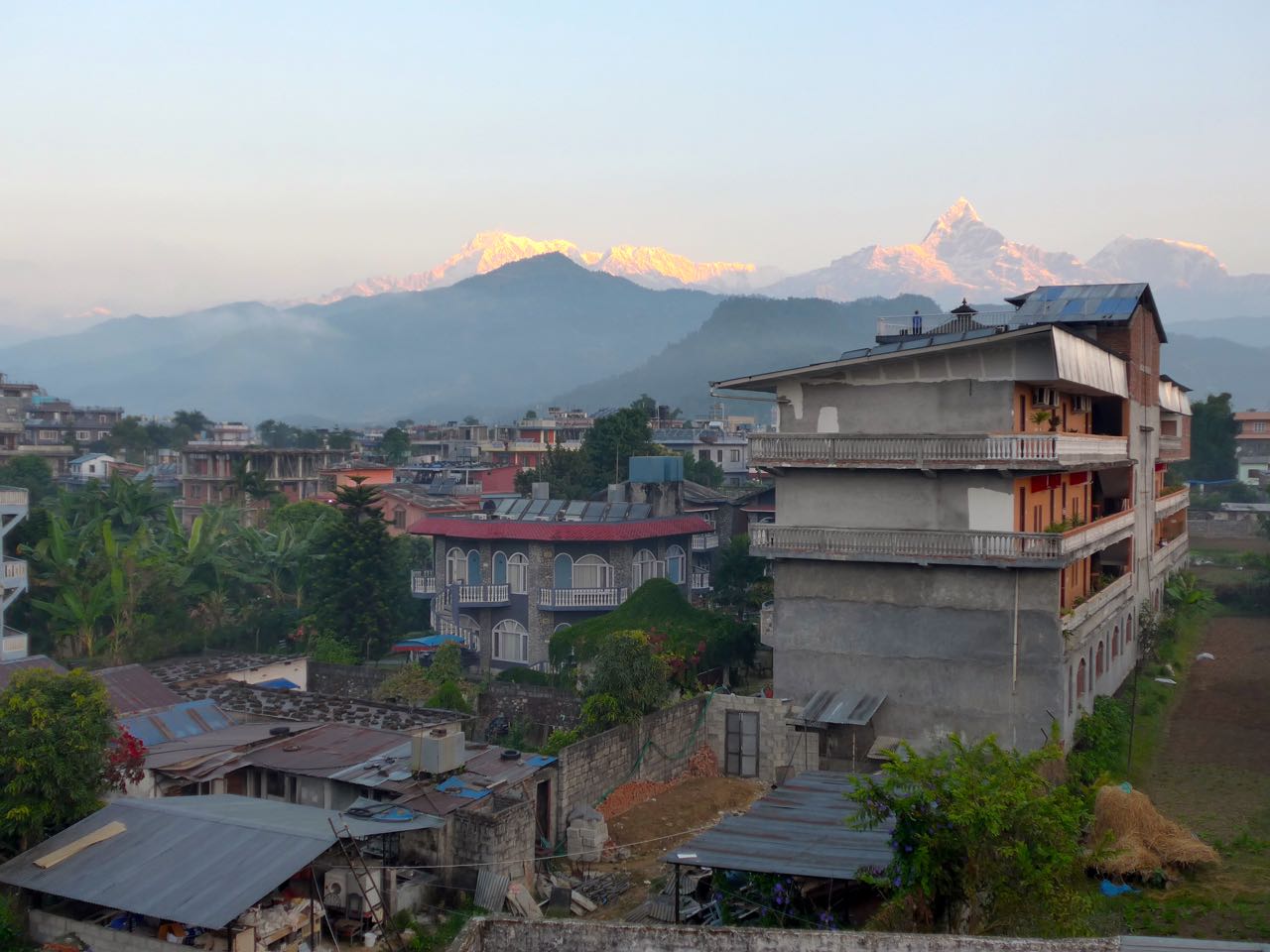 On the large lake, Sean rowed us around to a temple and the World Peace stupa.  We enjoyed the sun on our faces to the sounds of young Nepalese out on their one day off from work, singing, hooting and hollering. 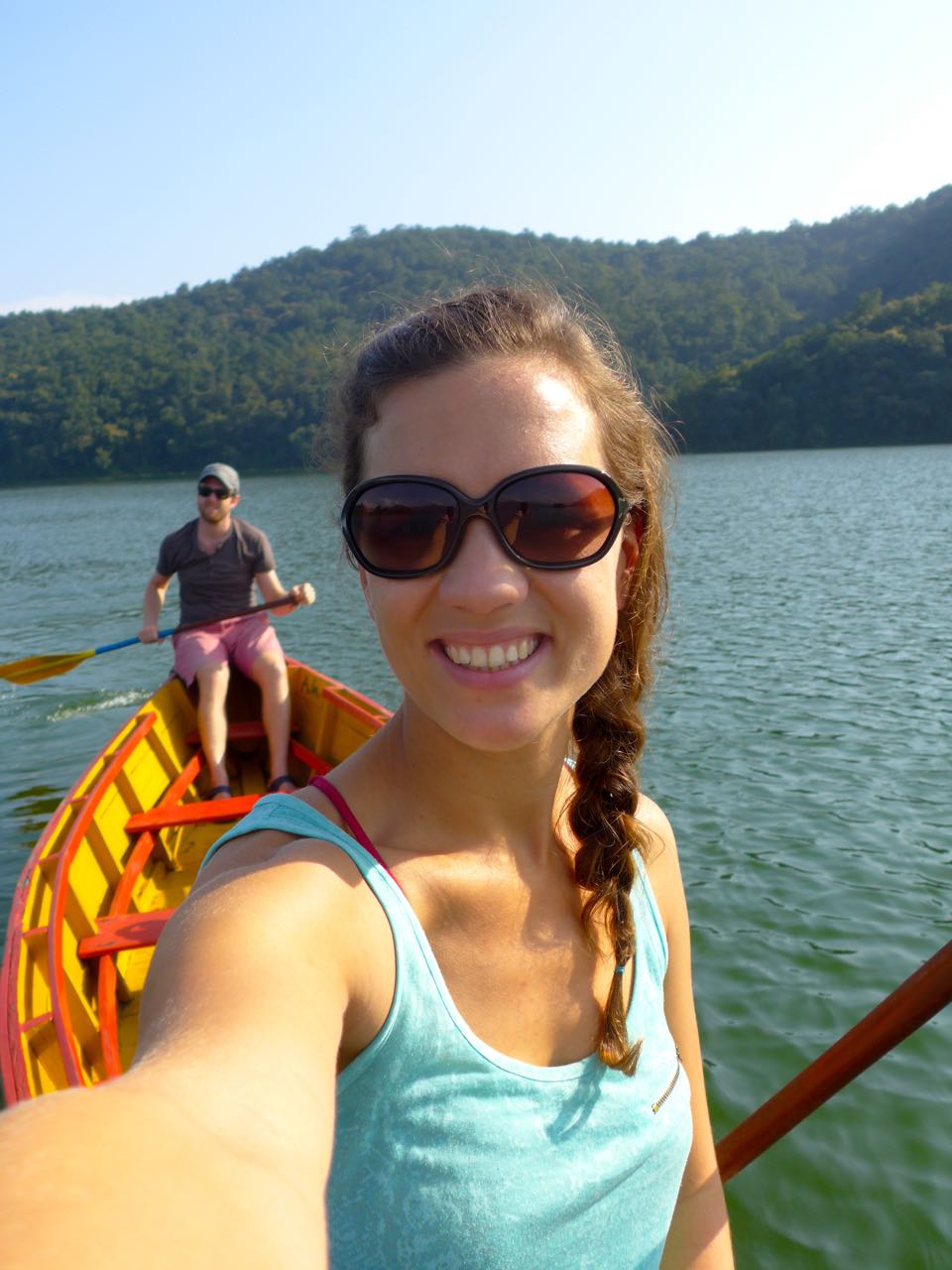 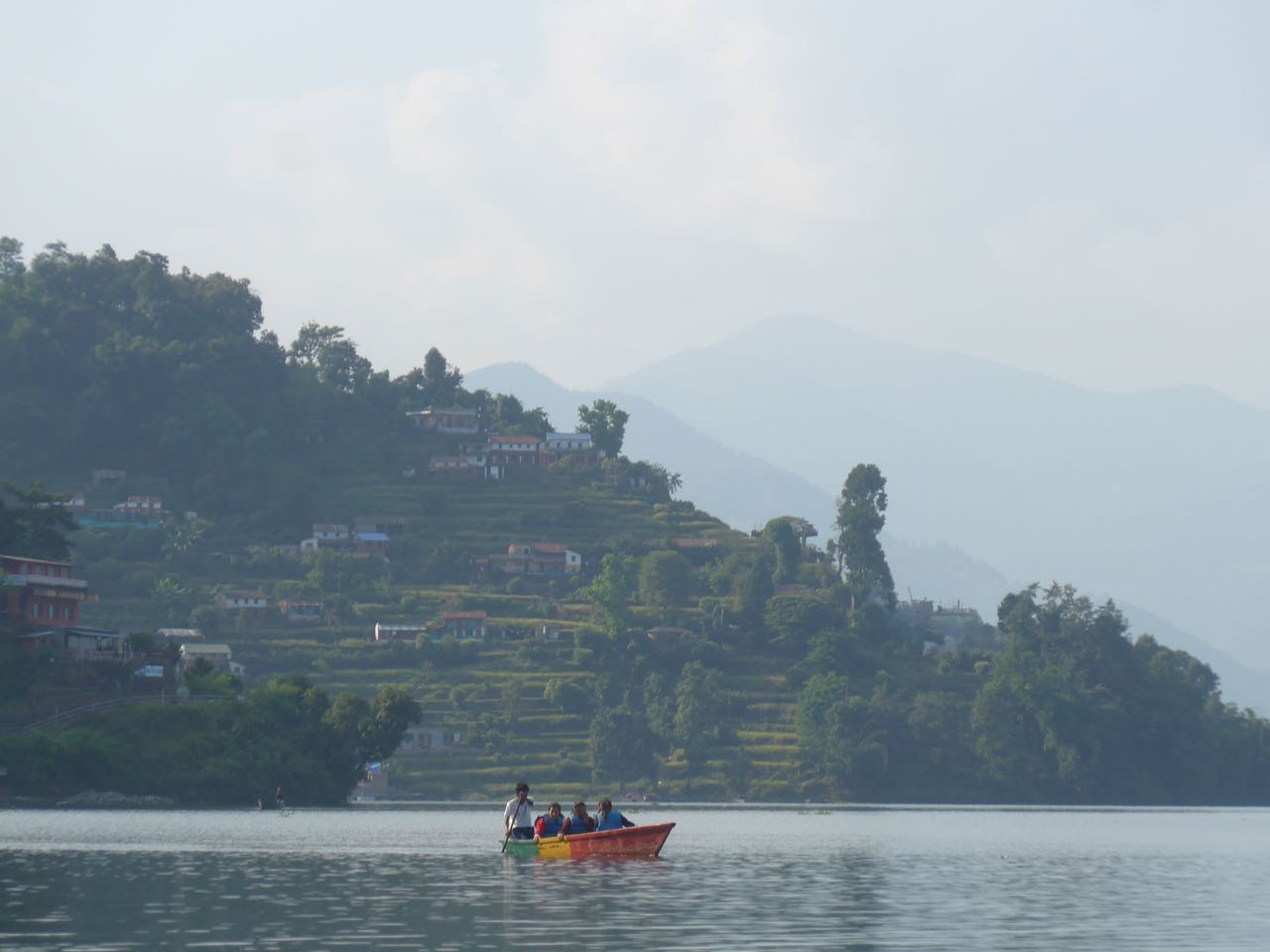 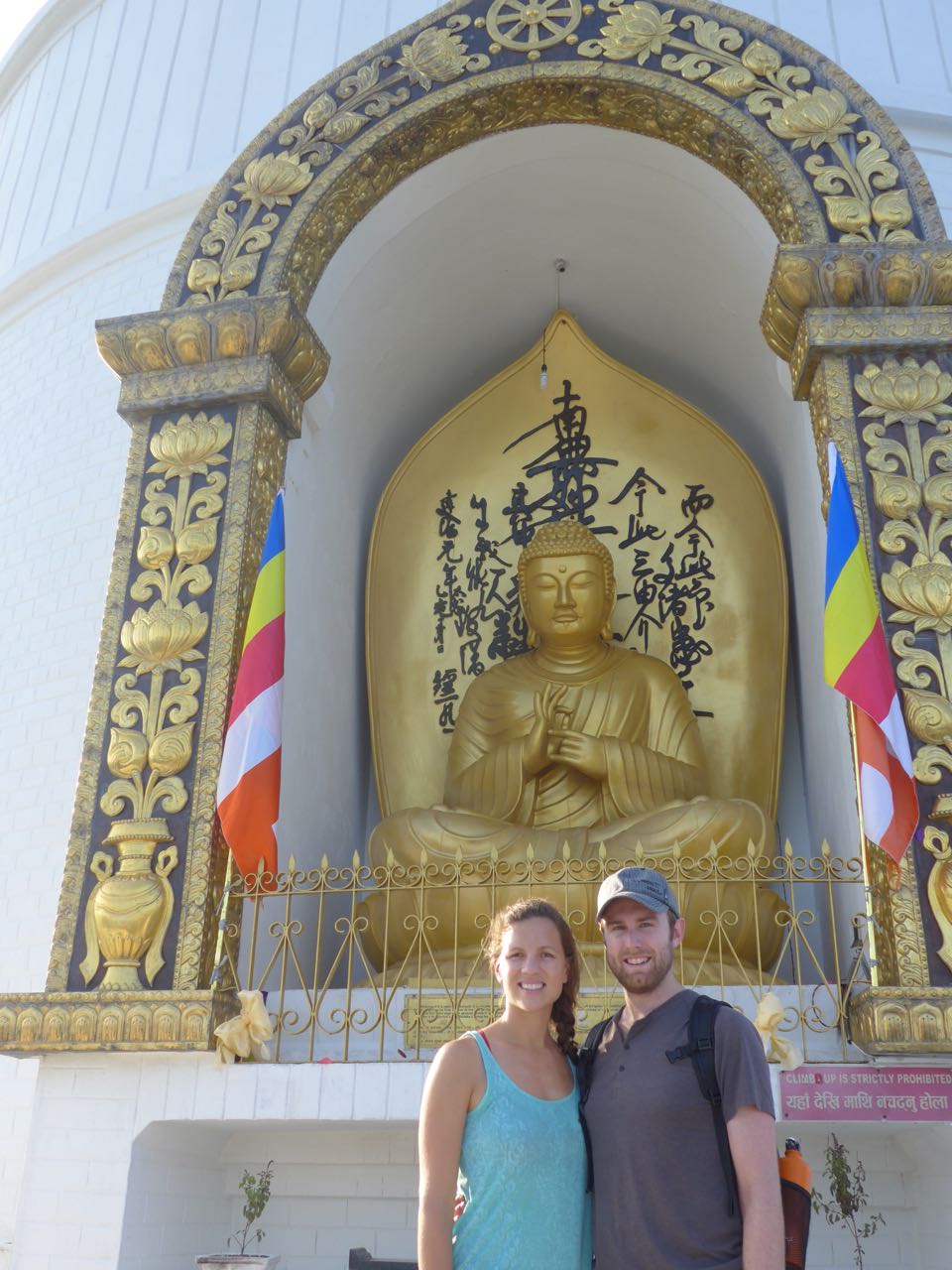 After our trekking adventure, we set off with our new friends Bart and Fieke to the city of Bandipur, an adorable town that only recently received access by road.  While fog impaired our views, it didn’t impair the fun of a Nepalese whiskey tasting on our balcony overlooking the old town. 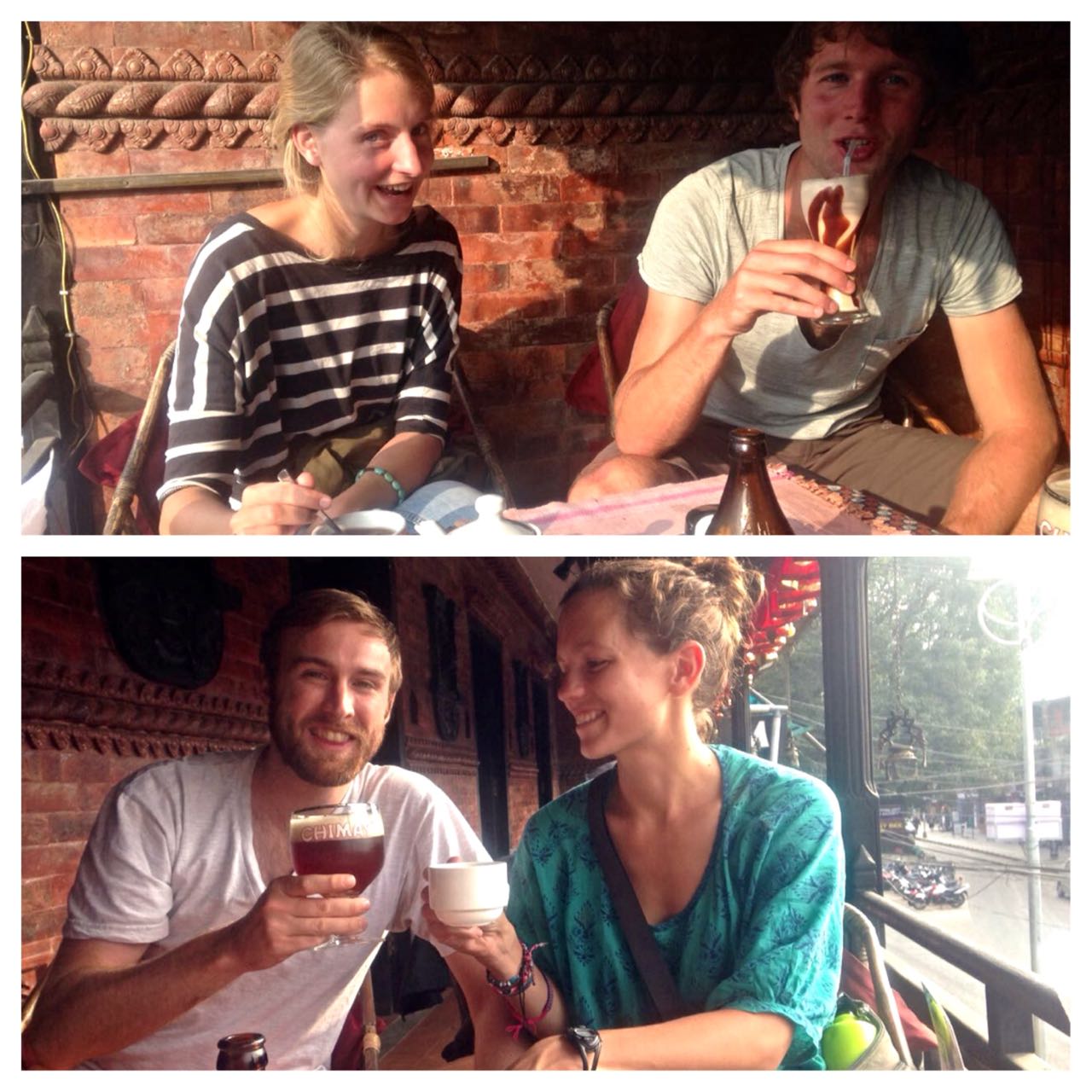 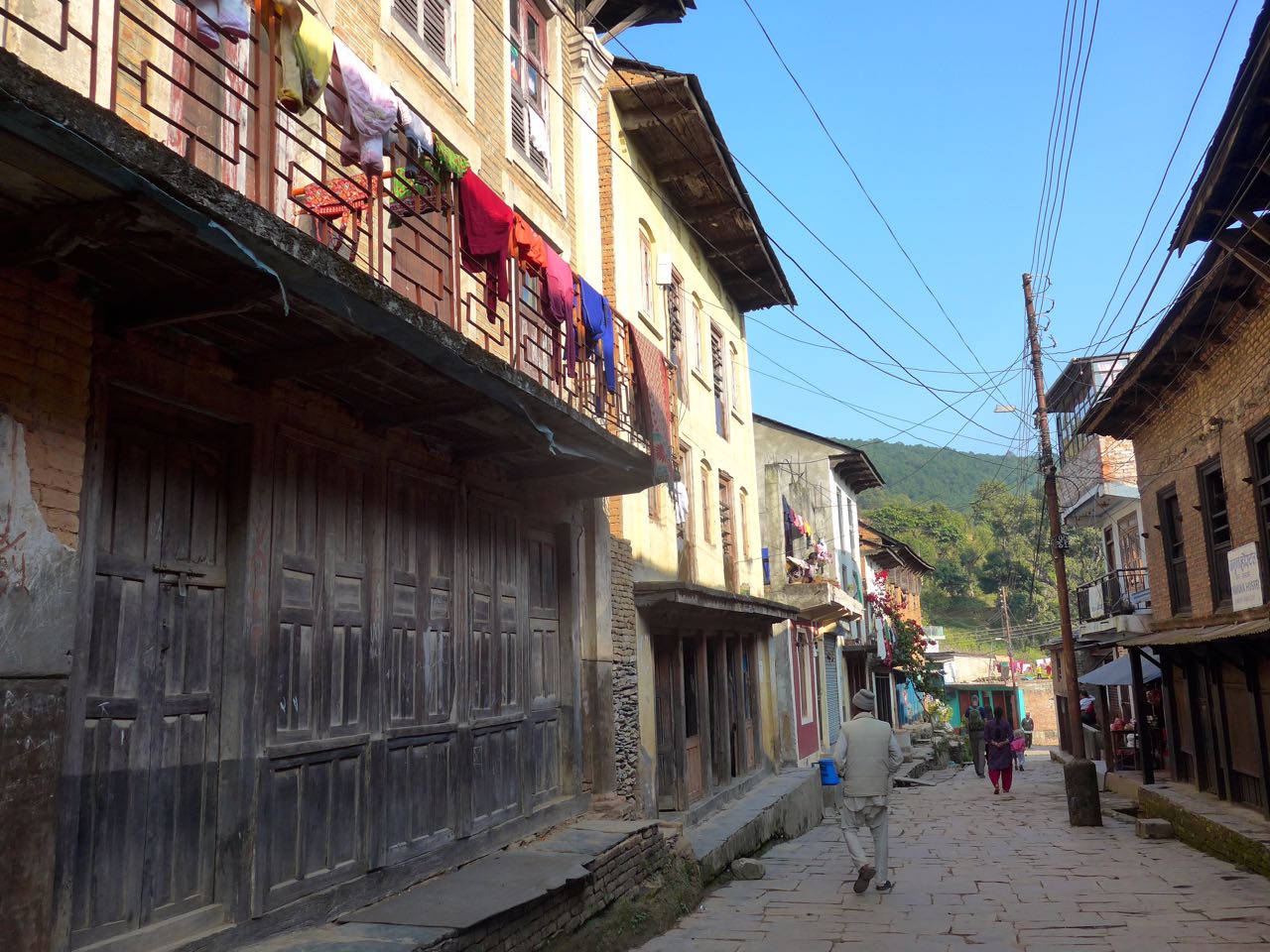 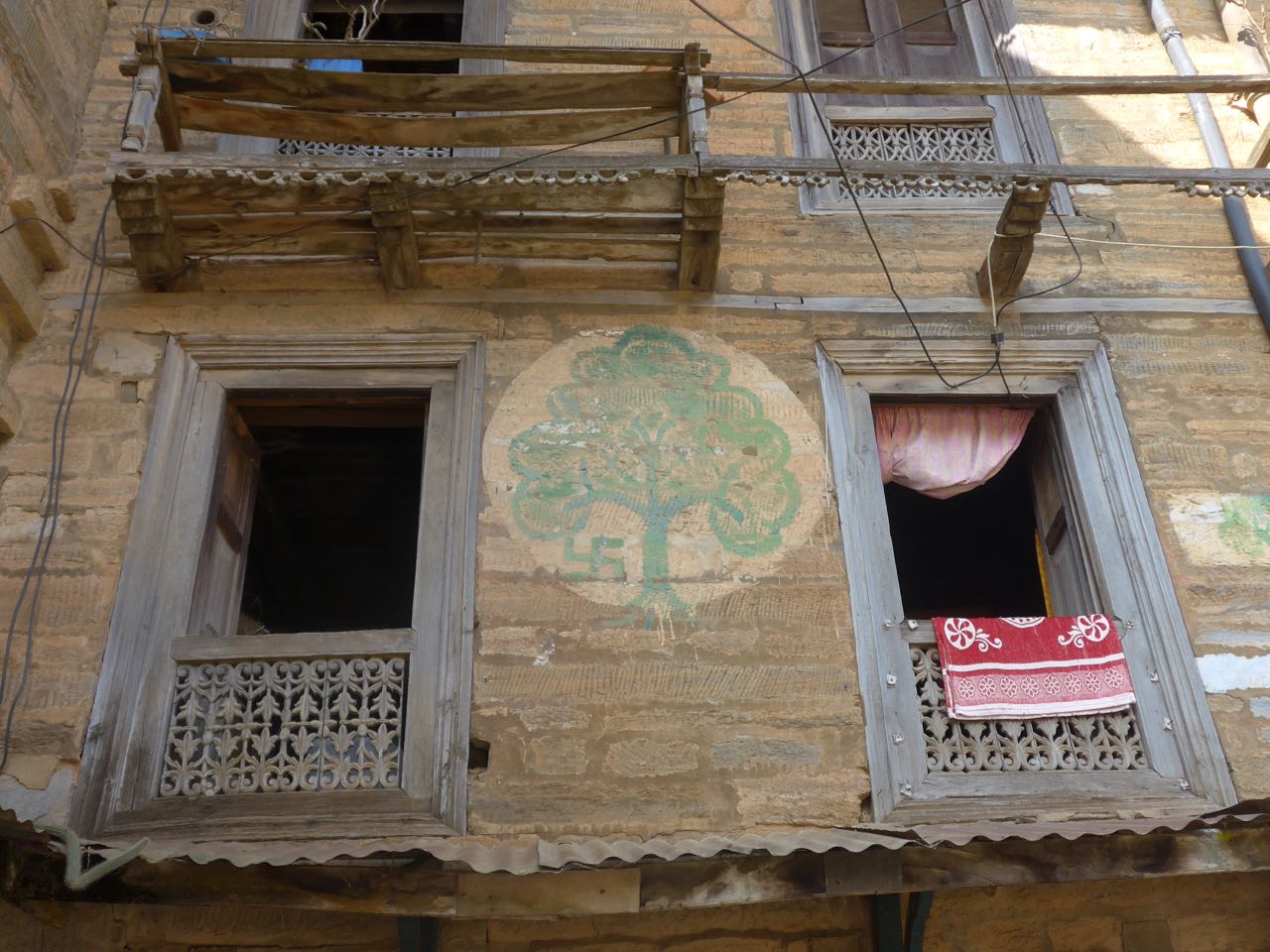 We then checked out the hilltop town of Gurkha.  While the hilltop temple was really cool, our custom guided museum tour from some Nepalese schoolchildren practicing their English was more memorable.  We (fortunately I think) missed one of the sacrifice ceremonies held at this hilltop temple – you can see a picture of the chopping block picture in our gallery at the bottom of the post. 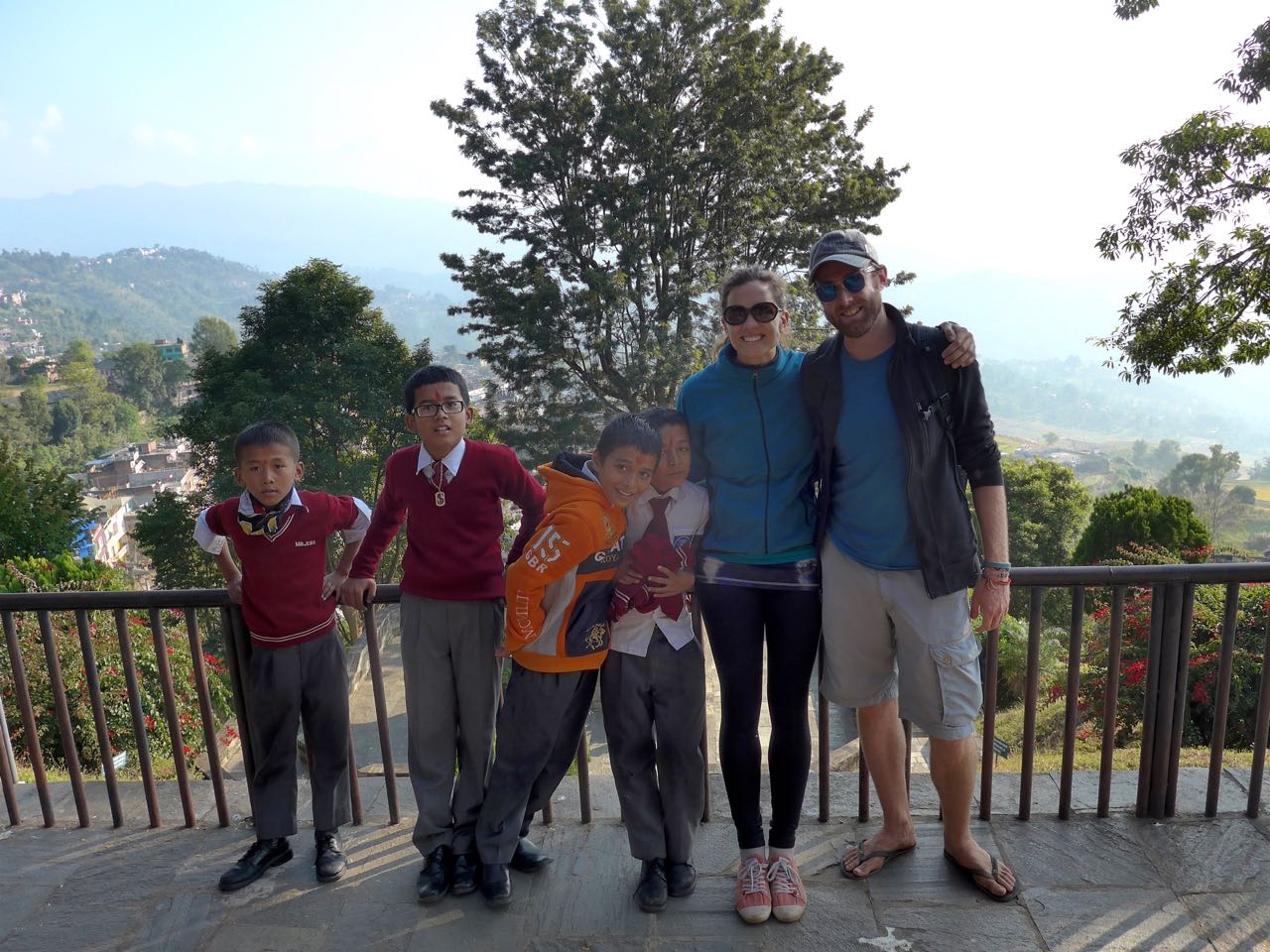 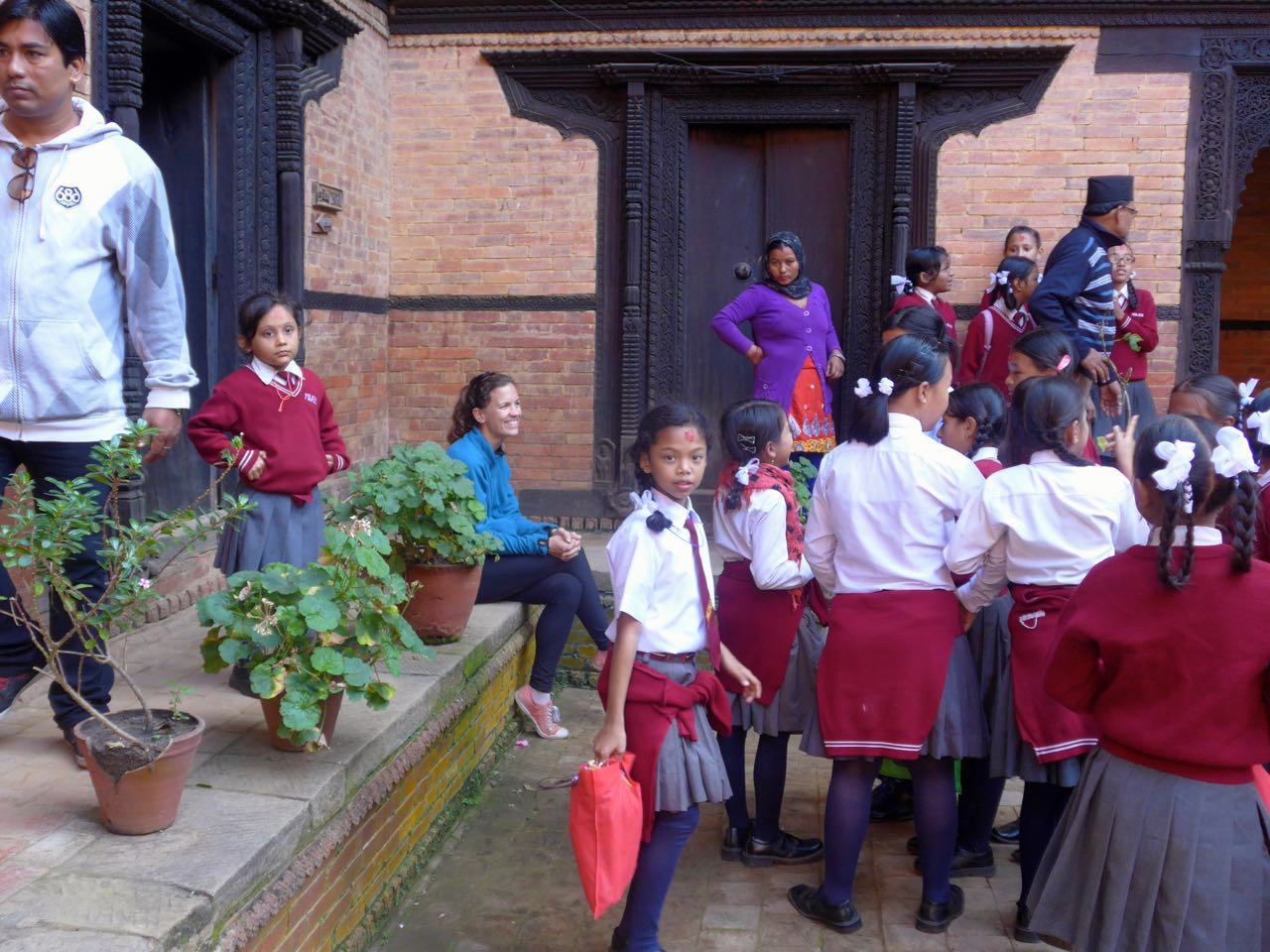 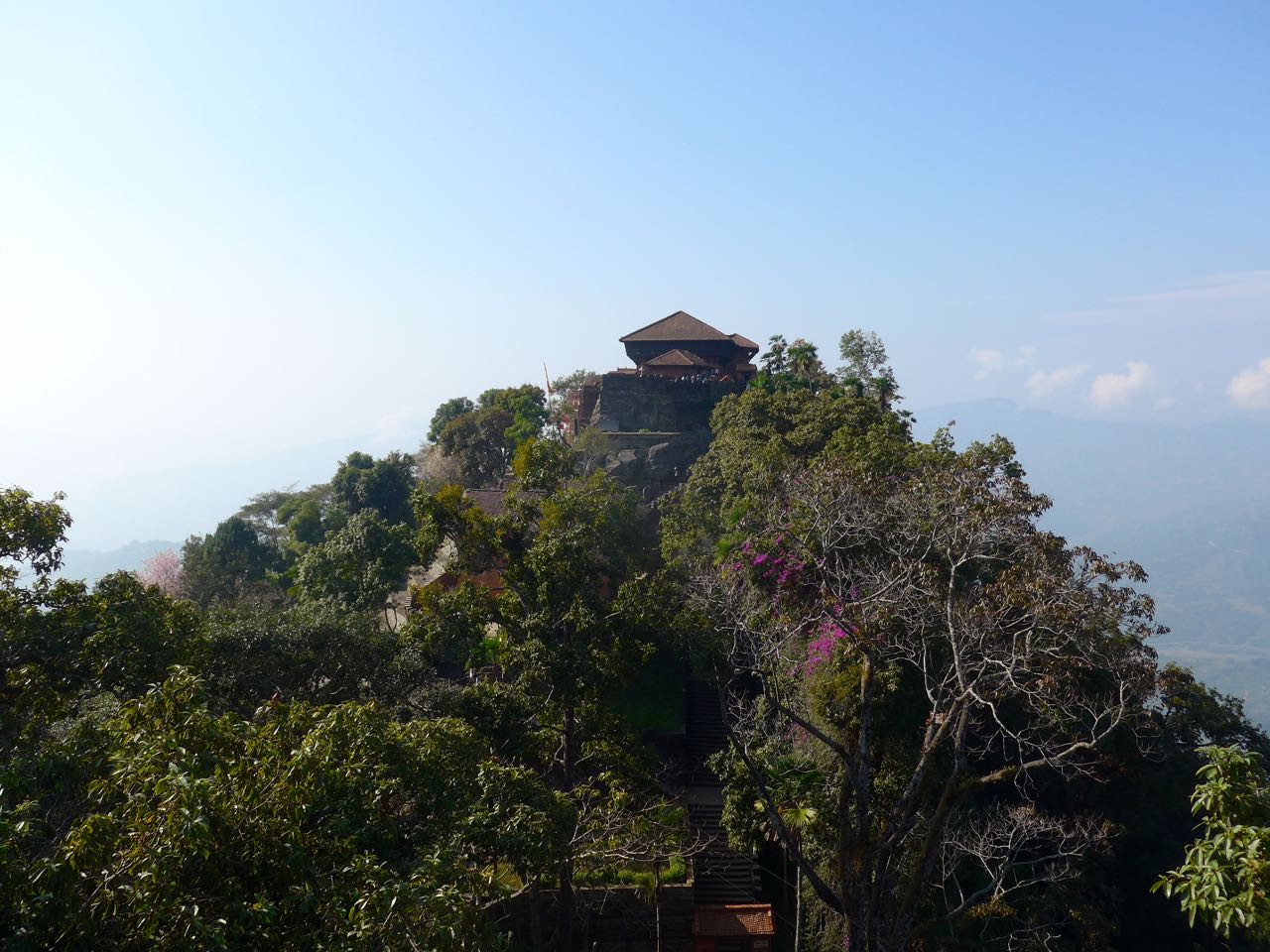 Nepal was fascinating, but the heart and soul of Nepal is in the mountains, which we will tell you all about next.