We loved visiting Montenegro and Albania – friendly people, relatively untouristed and a completely different experience than everywhere else in Western Europe.  And some good stories too!

We had four days to get to Tirana, Albania from Dubrovnik in order to catch our flight, which involved cycling through Montenegro. It is only a short jaunt down a very busy highway from Dubrovnik.  The highlight of Montenegro was cycling around the beautiful Bay of Kotor. 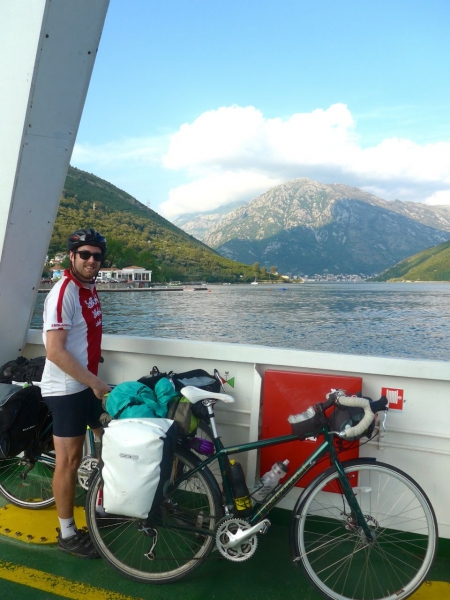 We found a scenic spot to plunk down our tent and enjoyed exploring the town of Kotor the next day, another walled city.  This was our view as we ate breakfast. 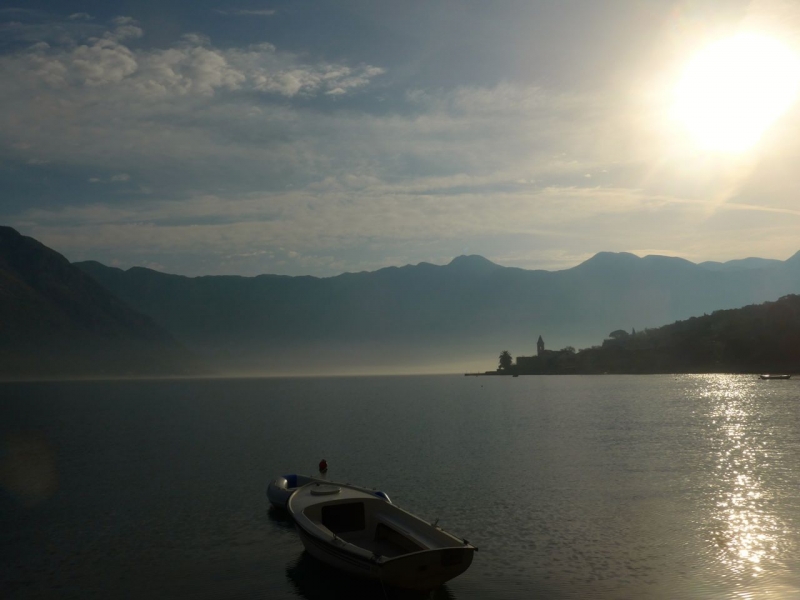 We also met a kind Serbian who was working at the campground we were staying at for the summer.  He entertained us with stories of Serbian soccer and fed us Raki (for energy!), a homemade liquor made from apricot which he drinks every day to keep his health up. 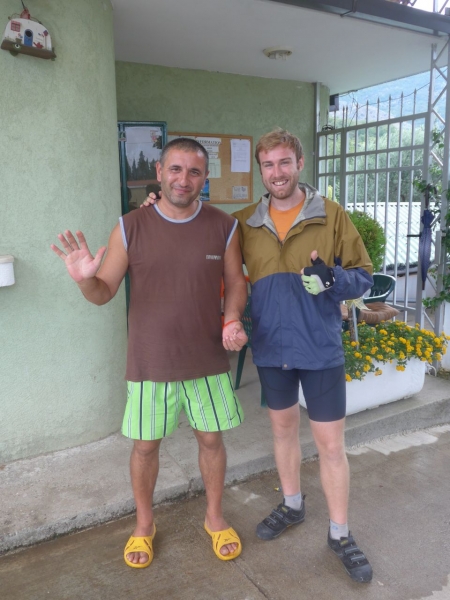 The border crossing into Albania was nondescript and quick, and we were shortly on route into  Shkoder, Albania. We had read about a former communist hotel, once the height of luxury.  The drizzling rain and grey skies didn’t help with the hotel’s appearance.  I went inside to check it out while Sean stayed outside with the bikes.  This was essentially pointless, because we could see what we were getting into – we knew we wanted to stay there for the unique experience of it.  A sparkling lobby with a packed cafe (served by valet parking)… and a room that was laughably bad.  Showering without electrocuting yourself was a challenge given the proximity of the shower head and the electric hot water heater.  Paint chipping everywhere, a wooden toilet cover, mismatched old fabrics, a bathroom door that didn’t work… it was perfect.  The 5am call to prayer that jolted us awake was a good reminder of the fact we were in a new place. 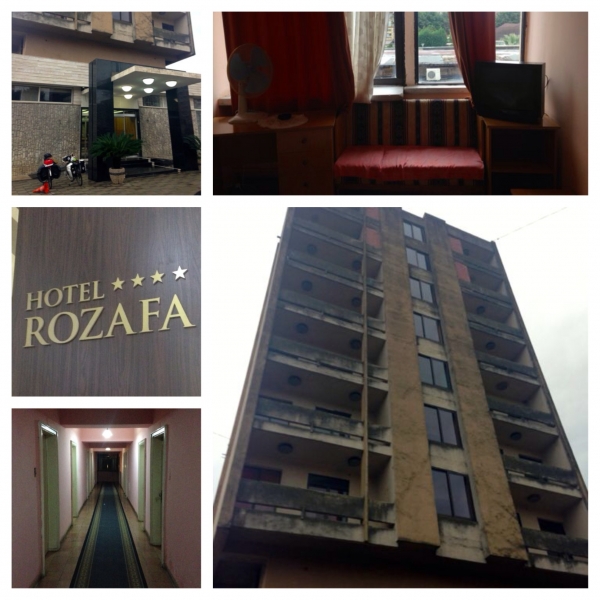 On our way out of the city, it was difficult to miss the gigantic statue from Albania’s former communist days. 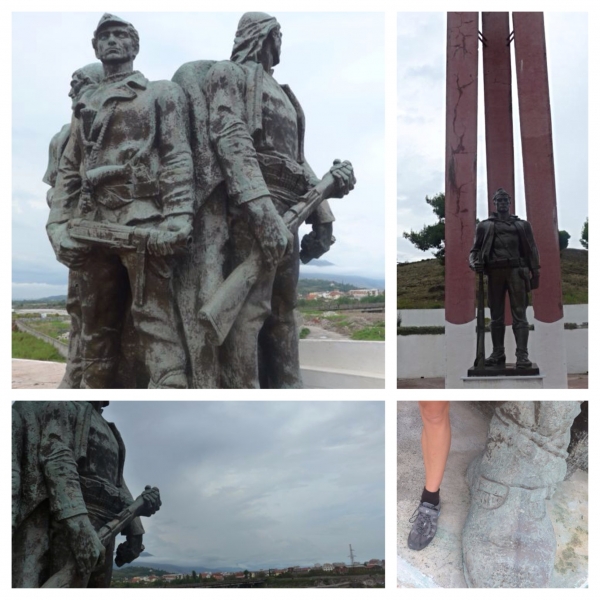 Our final day biking on our European tour was from Shkoder to Tirana, a flat ~120 kilometres.  Our first flat day in almost two months!  We couldn’t pass anyone without a hello and a wave, so we were entertained the whole ride.  Believe it or not, Albania only had 200 cars in 1990.  In 20 years, things have changed a lot.  Despite a lack of driving history, cars gave us room and roads were generally better than expected, minus a few kilometres of very pot-holed road.  Things were going smoothly until we were 20 kilometres outside of Tirana.  It’s as if the universe knew it was our last day on our bikes.  I got a flat tire, which we managed to fix with our last spare on the side of the road.  Then Sean heard a “plink”, and lost two spokes.  We very slowly continued on our way, anxious for the famous Tirana traffic we heard about (and Sean’s wheel breaking).  The universe must have changed its mind, because the main highway into the city was closed to cars.  We biked with two lanes to ourselves (excluding the screaming Catholics), and then the Pope drove by.  You just never know who you might run into! 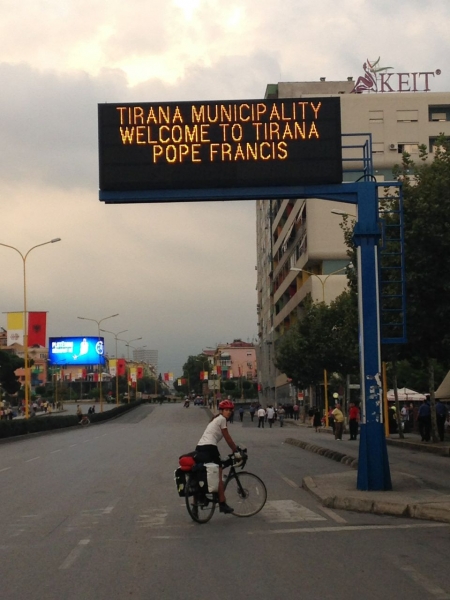 We (Cami) shed a few tears once we finally arrived and shared a big hug, sad that this part of our trip is finished.  We loved traveling by bike, and our year is going by so quickly.  But crying and hugging didn’t last too long because we really wanted a beer to celebrate!

Tirana is a very interesting city with Albania transitioning to EU membership in the near future.  It’s impossible to forget it’s Communist past, which governed the city from shortly after World War Two until the early 1990s. 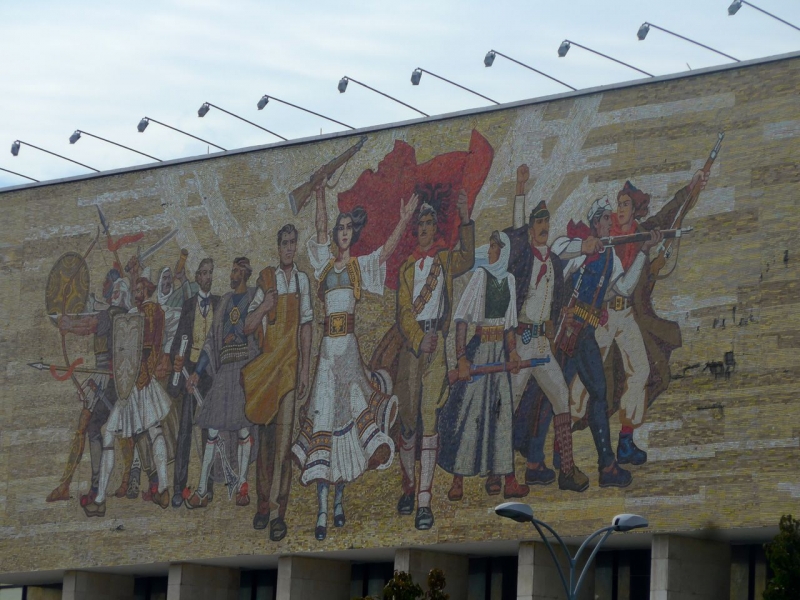 A highlight was seeing the monolithic pyramid building designed by the Communist leader’s daughter, now as you can see fallen into disrepair. 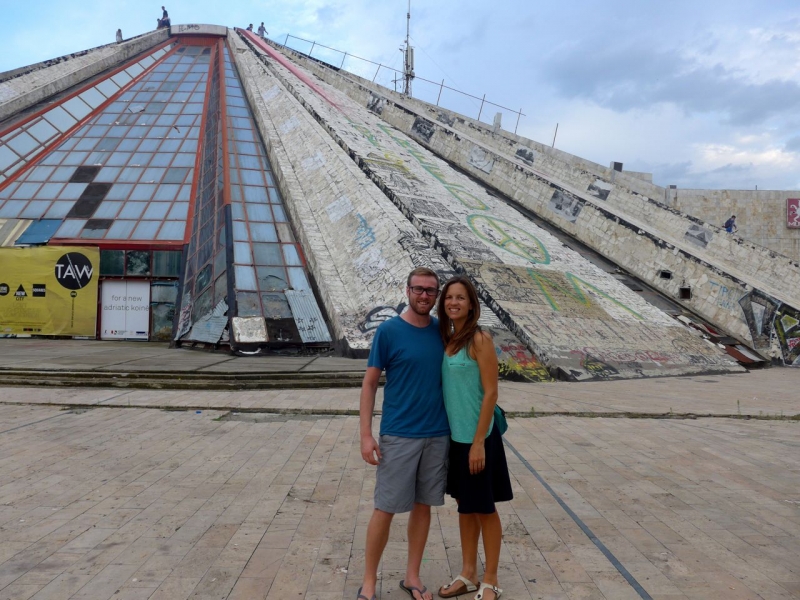 We both got haircuts, taking advantage of the service-based economy, for a total of $7 Canadian. 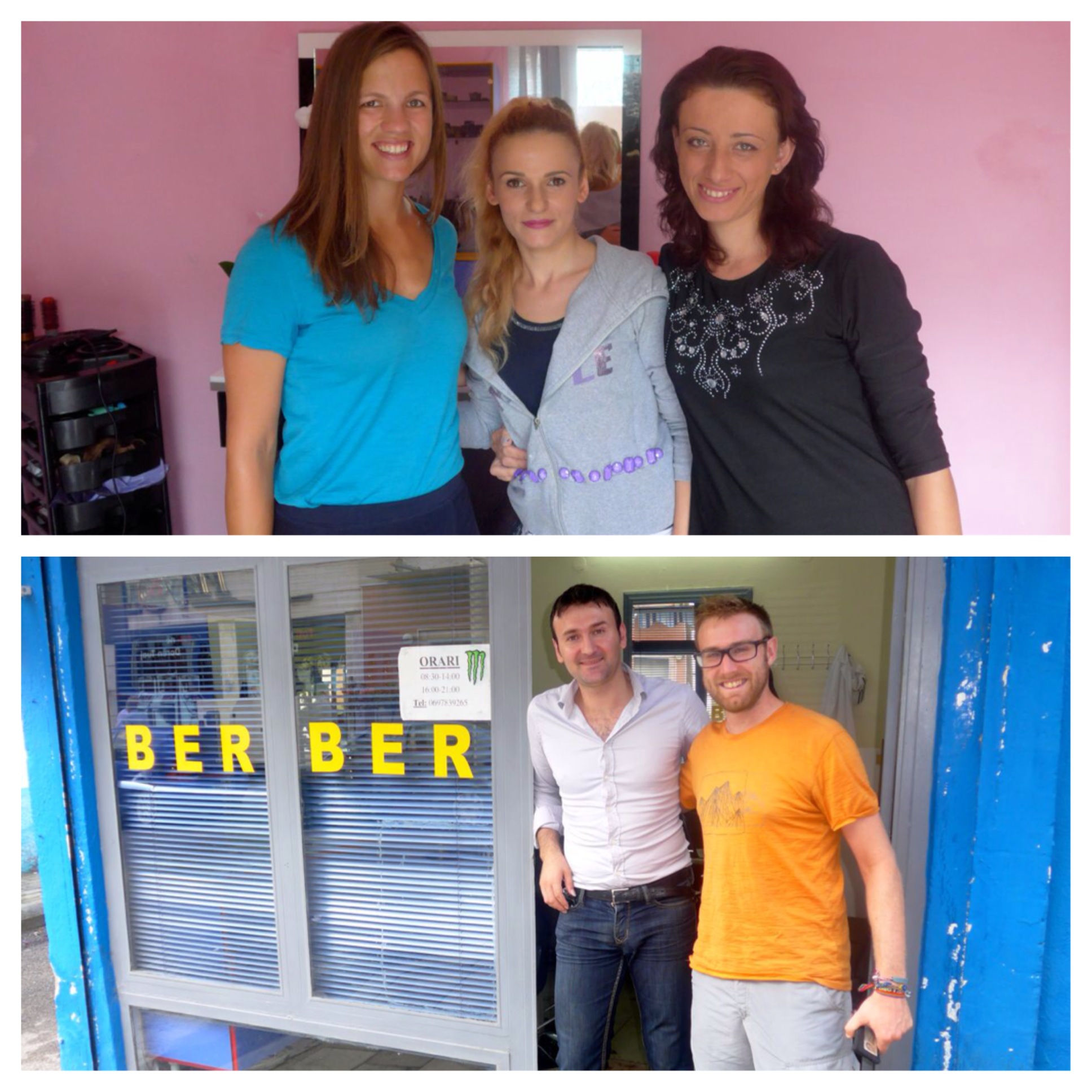 Another form of entertainment in Tirana is watching the main traffic circles at rush hour and counting the accidents.  We were there for 10 minutes and saw two!

We’re off now back to London to recuperate for a week, find new homes for Winston and Greta, and get ready for Part 3 of our world adventure!  But not without a one day layover (and overnight in the airport) in Istanbul first… 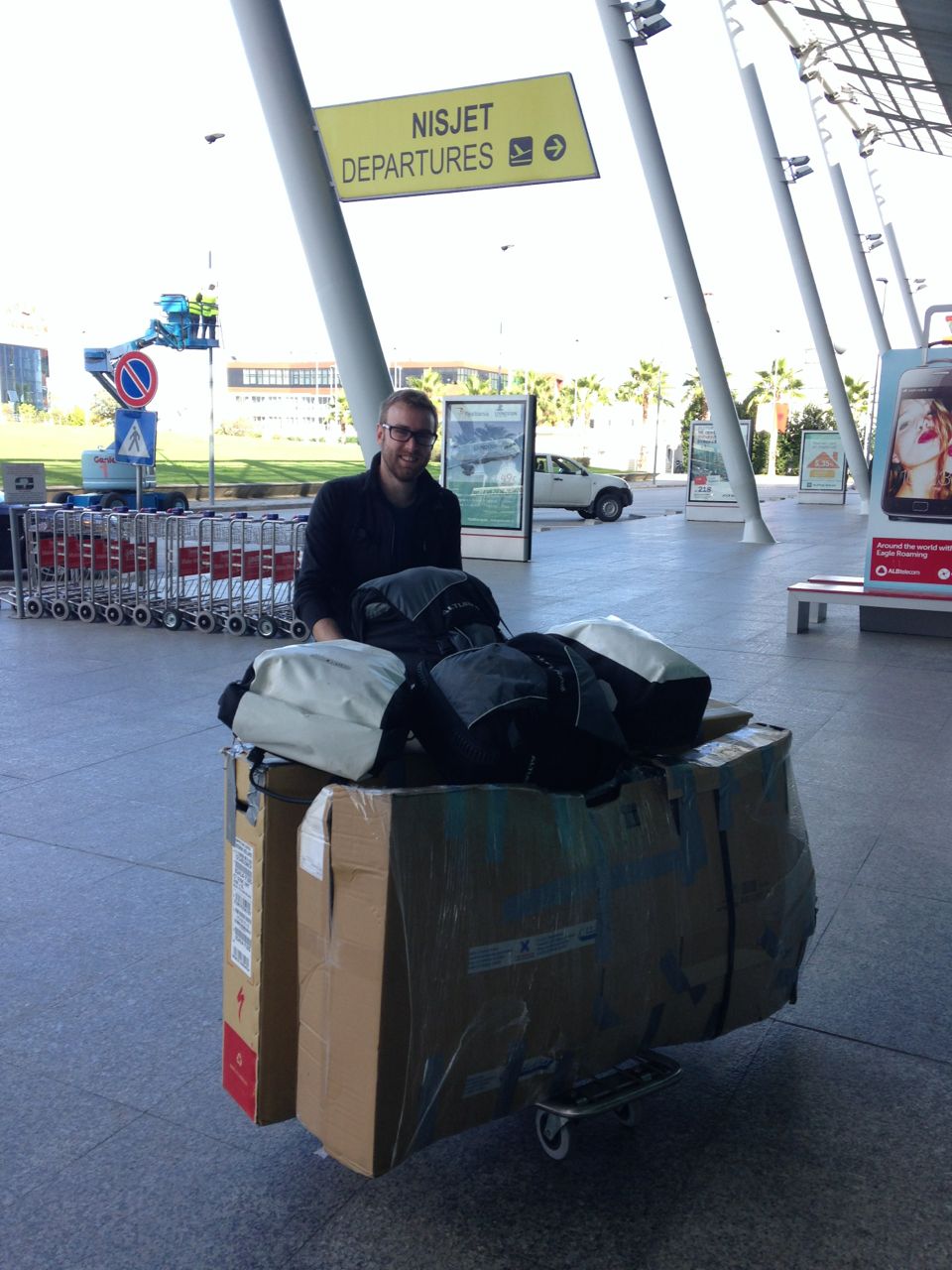 4 thoughts on “Eastbound and down to Montenegro and Albania”