As soon as we entered into Tuscany, we realized we may have spoken too soon regarding hills.  Switzerland had hills, yes, but Italy has hills that do not end.  Sometimes grinding up and up for an hour straight, the tune of “this is the hill that does not end” gets stuck in my head.  And Sean’s too, once I started singing it not knowing what it was…

But we put up with the hills, and maybe even enjoyed them.  Because one of the good things about climbing is the descents.  Tuscany gave us incredible natural views and the best winding downhills of the trip.  And also because we had SUNSHINE! 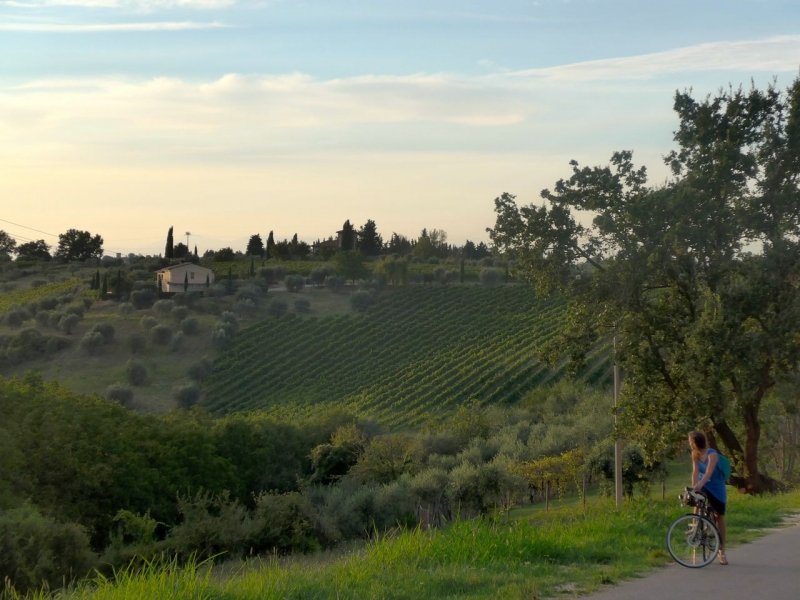 Only 30 kilometres out of Florence (mostly uphill) we saw signs for a campground and decided to investigate.  We found paradise – a pool and an incredible view of the vineyards and valleys below.  Waking up the next morning we couldn’t tear ourselves away, so we napped in the sun loungers and checked out a local winery for wine and olive oil. 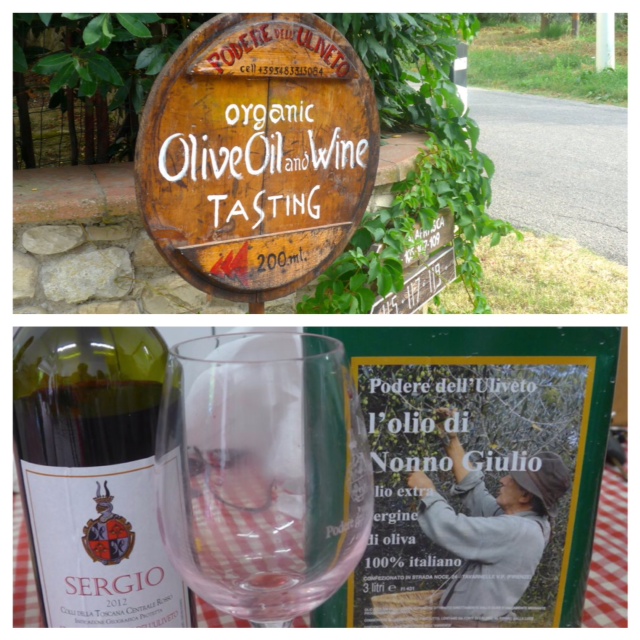 We met Dutch friends Tom and Judith who we enjoyed some Italian food with, and who nicely made us a delicious breakfast the next morning.  To top it off, they gifted us their pindakaas aka peanut butter.  They have moved Holland into contention for the Nicest People Award.

Planning routes is more difficult here without the nice (free) maps we had in France and the option to use the Google Maps bike route planner (our go-to).  Picking which road to go on in Italy is a shot in the dark.  As we were leaving our campground paradise, the skies opened up so we popped into the tiny mini-market just down the road for some cappuccinos to wait out the downpour.  While we were there, we got chatting (in Italian) to the adorable couple that run the place, who changed our route completely.  They said “beautiful, and delicious gelato”. 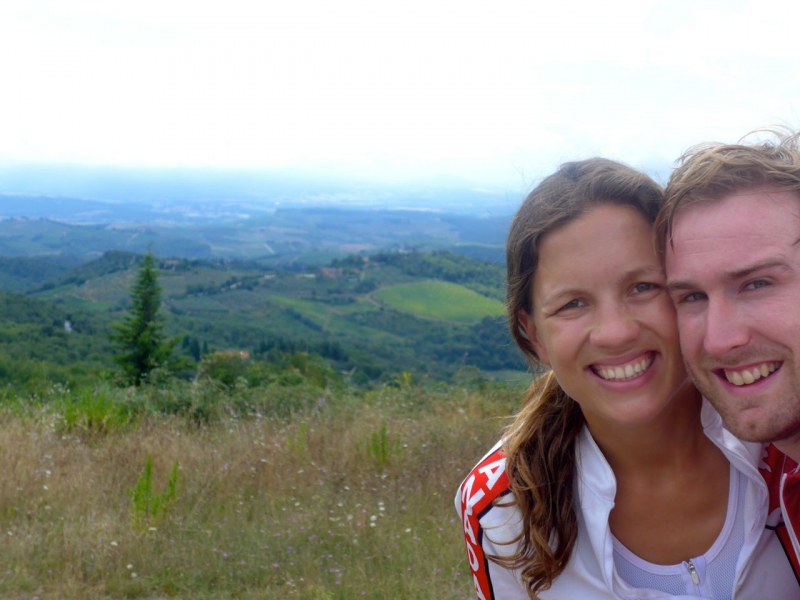 We found a cute town with interesting Etruscan ruins, fantastic gelato (when an italian tells you to eat the gelato, always listen), and delicious pizza. 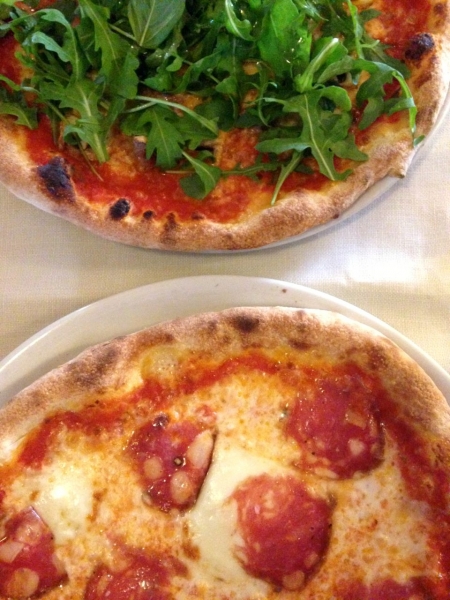 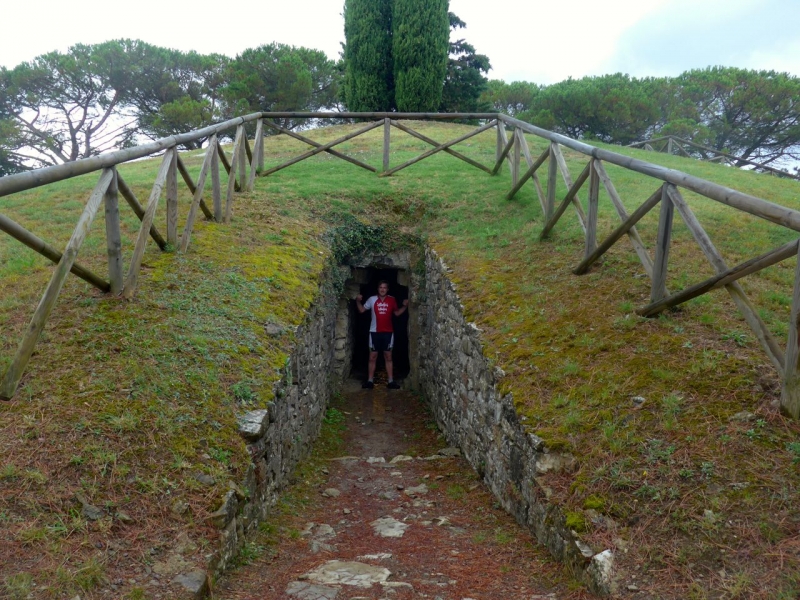 Continuing through Tuscany we stopped in Sienna where we found an amazing butcher – check out that meat!  The porchetta panini with creamy mustard sauce was scrumptious.  Our favourite part of Sienna was wandering the winding streets around the centre seeing the flags of the different neighbourhood along the buildings. 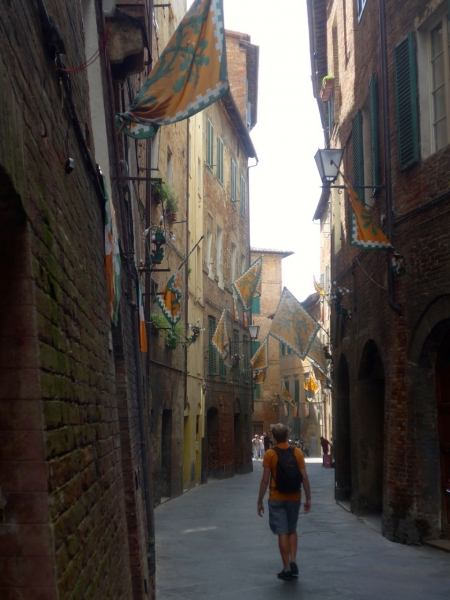 We continued on to too many cities that start with “mont” (never a good sign for people traveling by bike).  At least they were nice to look at, with famous and delicious wine and cheese, and great views. 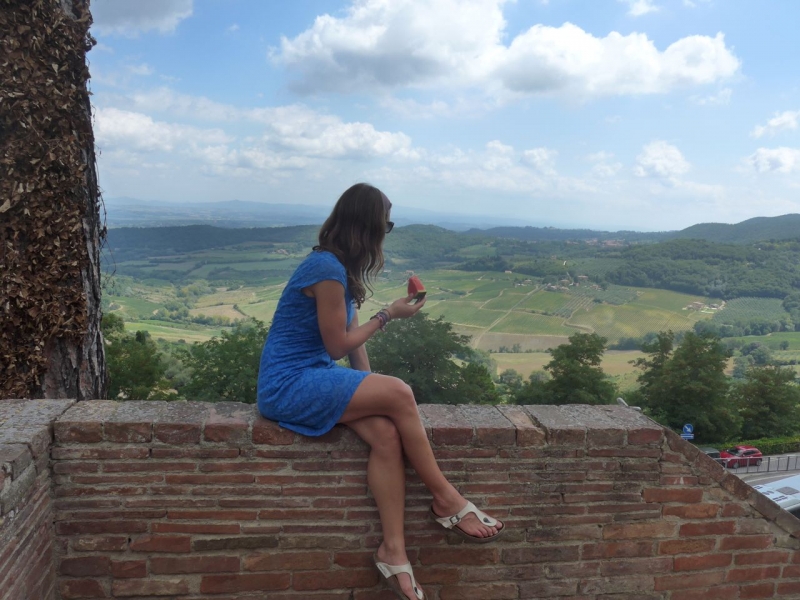 One of these cities though was on the pilgrim route, and we found some Italian bike tourists to lunch with.  They were eager to try a local specialty called pici, basically hand-rolled fresh noodles.  It was delicious, and it reminded us of the fresh Chinese noodles you can find in Vancouver.  But don’t tell the Italians that their noodles are like Asian noodles, as we learned the hard way! 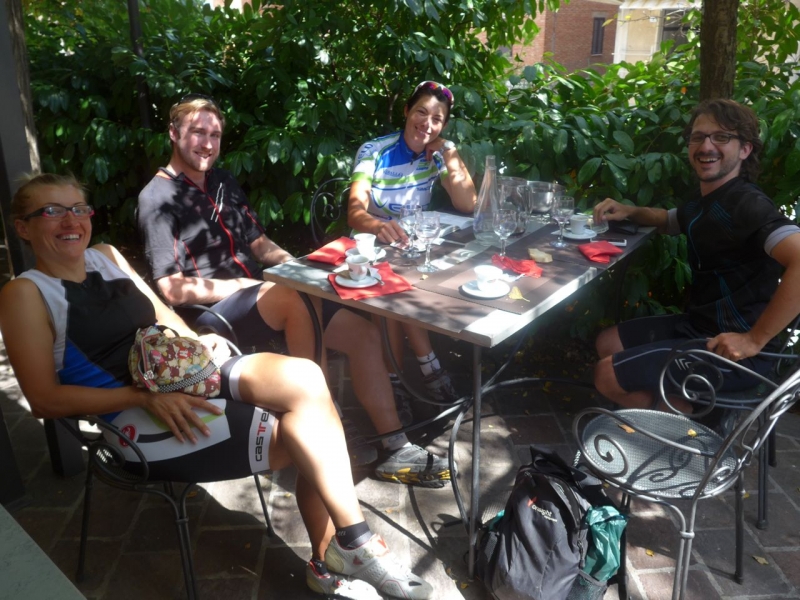 One very hot day we were climbing in some pretty rural mountains and ran out of water.  The first place we found we pulled into, a tiny corner store.  Water bottles in hand, we approached the bar and while they were being filled found a cold lemon iced tea (what I had been fantasizing about), then took a peek in the freezer.  After rummaging around we found a frozen lemon filled with ice cream and just had to have it.  We collapsed on a table outside and dug into what was maybe the most delicious gelato of Italy.  Served in a lemon. 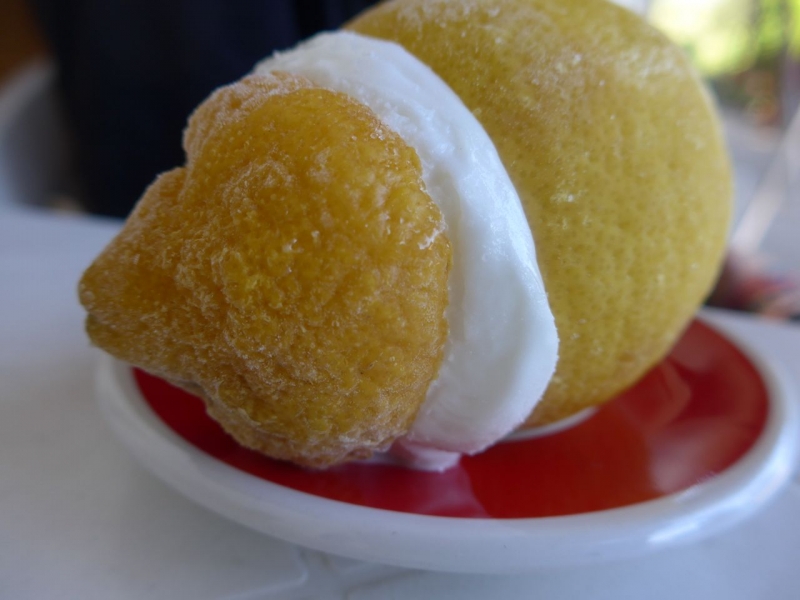 We moved into the Umbria region of Italy, right beside Tuscany and known as the green heart of Italy.  This started at Lake Trasimeno, where we caught a beautiful sunset while cooking dinner, then moved on to the capital of Perugia. 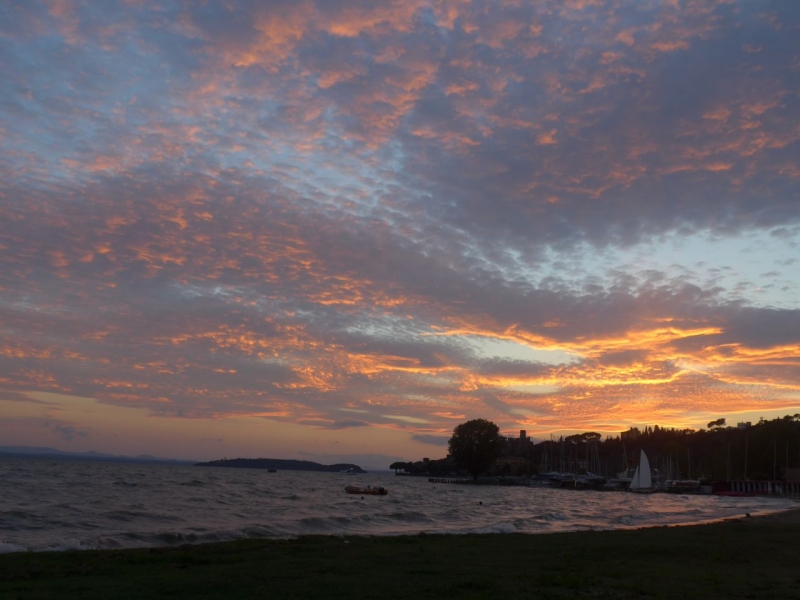 Rationalizing that enough hills had been climbed, we opted for the lazy route and went up the hill in one of the tiny trams, nicely outfitted for bikes.  We relaxed in the square with some local beer, found paninis at the local hole-in-the-wall (different than what we call a panini at home), 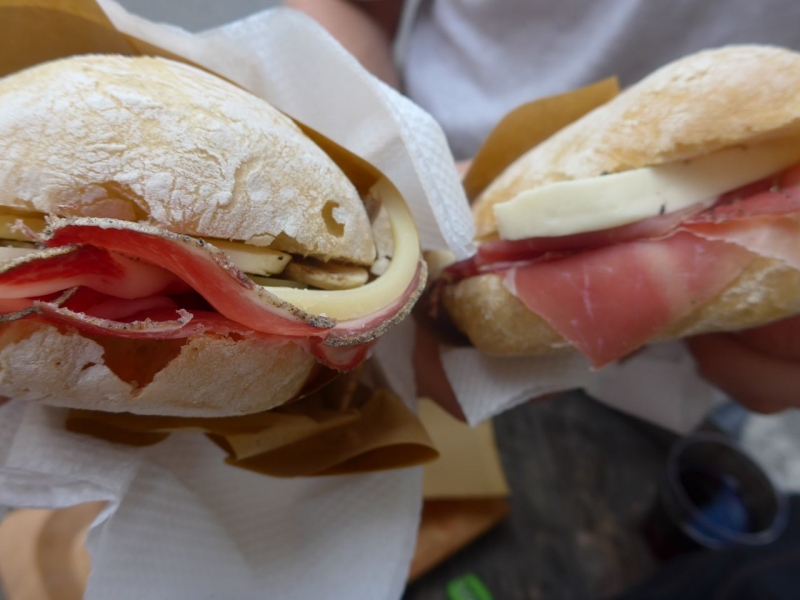 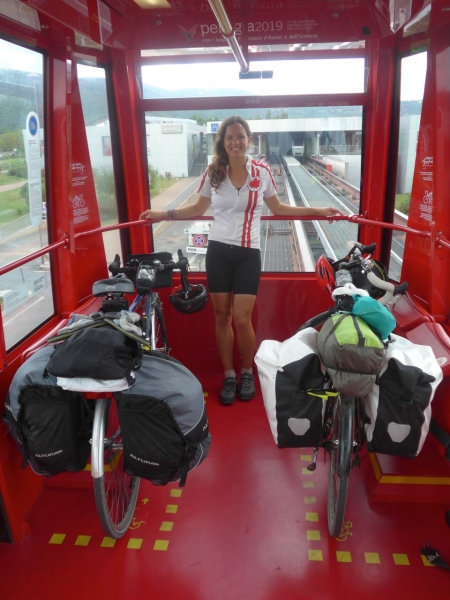 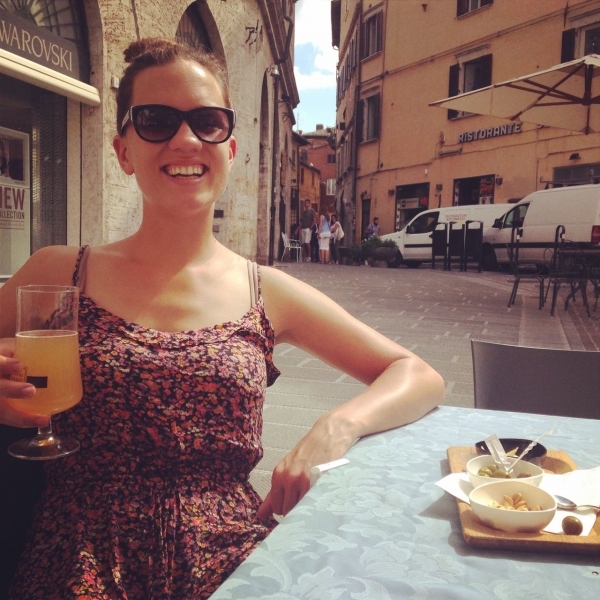 Climbing out of Perugia we made our way to Assisi, an interesting religious town where St Francis of Assisi is from.  Just outside of Assisi we found a public water fountain – another reason biking in Italy is fantastic is easy access to clean drinking water. Which solves one of our two biggest questions – where to get water and where to go to the bathroom.  Another day we weren’t so lucky, and were beginning to worry as we were carefully taking small sips.  Then we stumbled upon the staff entrance of a massive luxury resort in the middle of nowhere, and they obligingly helped us out.  Perfect timing too, before we started up this beast of a hill! 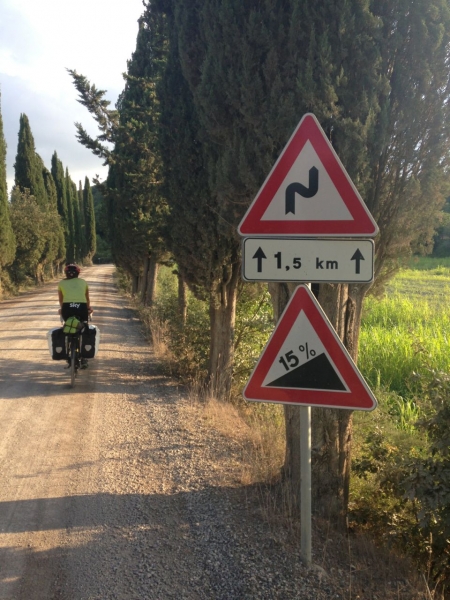 Sean’s hair was starting to get too shaggy, so on the principle of “buy gelato, not haircuts” Cami gave it a go.  It didn’t turn out too badly. 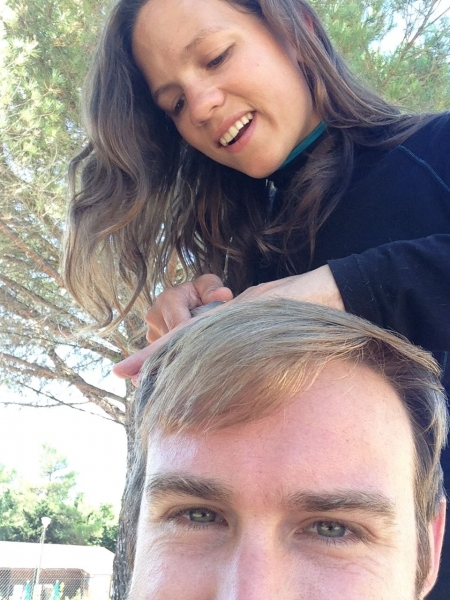 In Italy we found ourselves wishing less and less often that we had higher gears.  Near the end of Tuscany, we saw some people on fancy road bikes ahead of us on a steep climb and relished in the look on their faces as we slogged past them, panniers and all.  And then we were ready for our Roman holiday.