Croatia: where perfect turquoise ocean meets rugged and natural beaches. Where rocky mountains mean steep climbing but the best descents of the trip.  And where more often than not our rides were designed around the best beaches to visit. 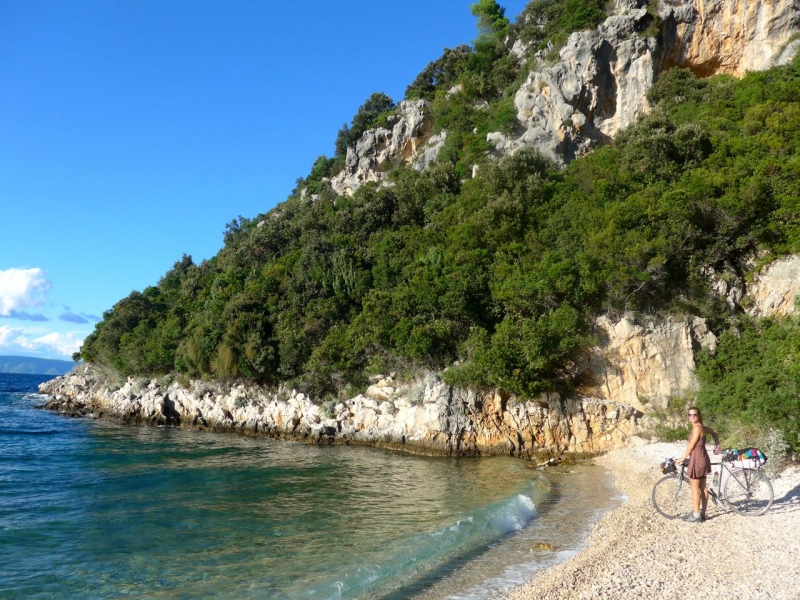 We arrived bright and early off the boat in Split, and spoiled ourselves with a points stay at a fancy hotel. Alongside the entire cast and crew of Game of Thrones! It was a tough day on the beach loungers followed up with a delicious dinner of Croatian seafood with our new friends Barry and Janice.  We shared the local soft and smoky Dalmatian proscuitto as well as sheep’s cheese.  Mmm. 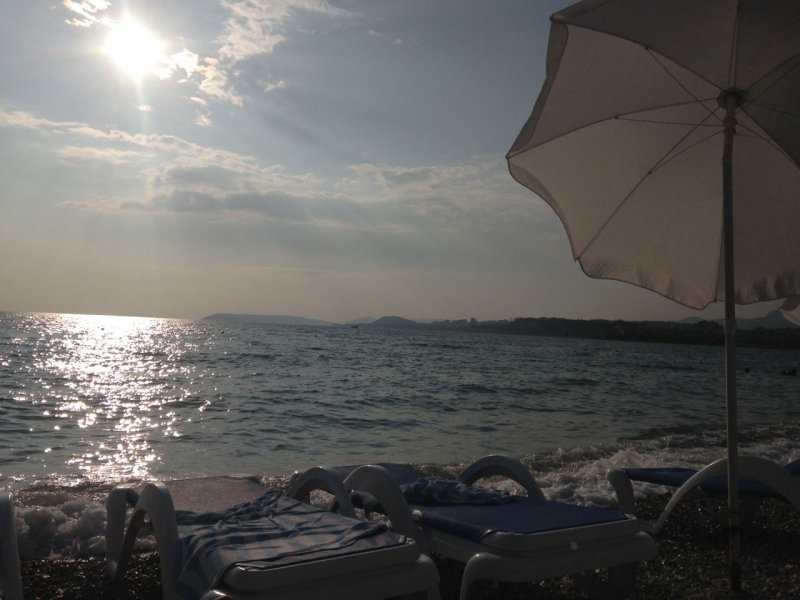 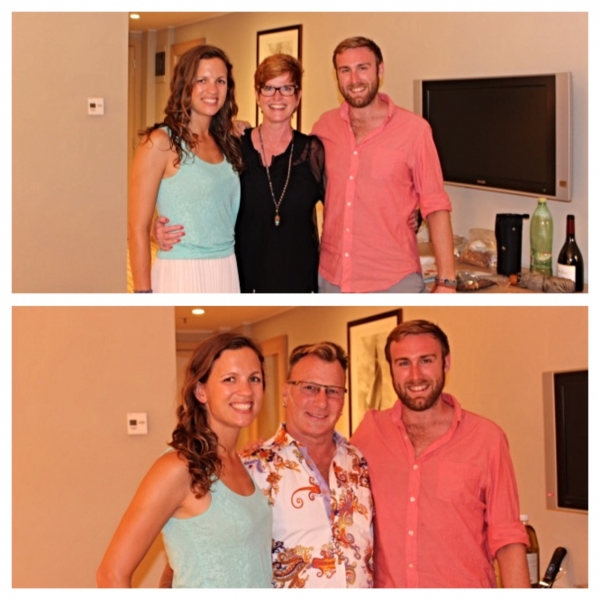 Alas Winston and Greta were calling, and off we went island hopping, final destination: Dubrovnic.  Our route is below. 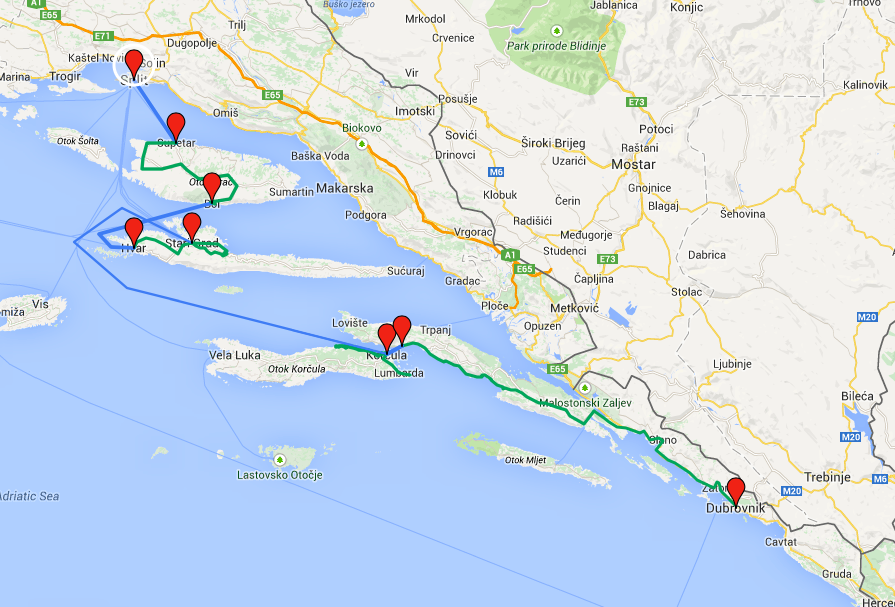 Arriving on the island of Brac and biking along a seaside path we were pretty happy with our decision. We met more bike tourers in Croatia than any other country in Europe, starting at our ocean front campsite.  One of the first things we learned was that in Croatia, the same wine sold in the litre bottles is cheaper than in the 750 mL version.  No idea why! 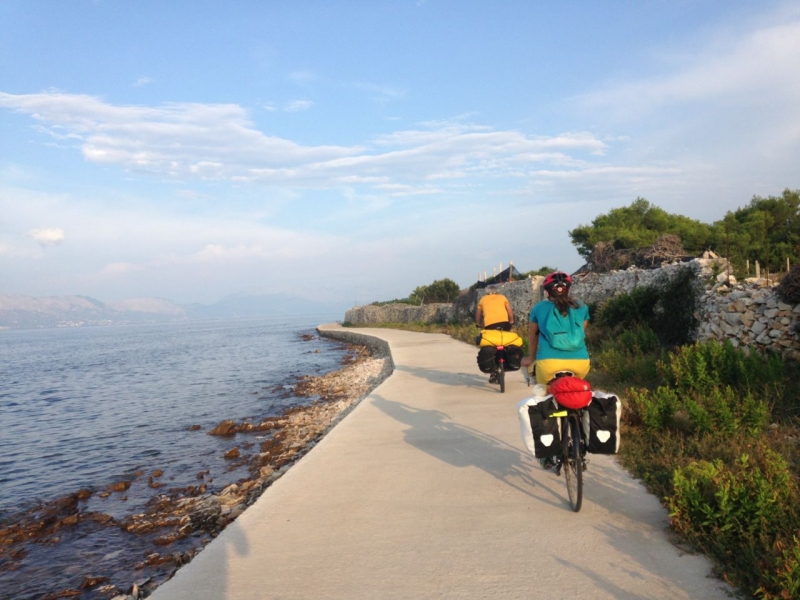 We set off with a new German friend Stefan for the town of Bol across the island, famous for it’s Zlatni Rat beach, ugly name, beautiful beach!  Along the way we were misled by some “bike paths” where we did less biking and more walking.  At least there were no cars? 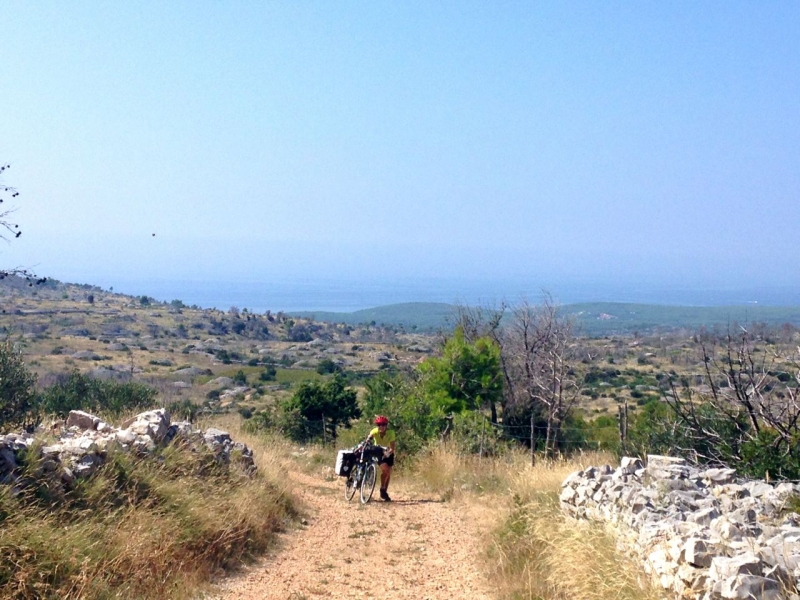 With no known boat for bikes to the next island, going to Bol was a pretty big risk and we crossed every finger and toe that we wouldn’t have to go back up as we sailed down the 400 meter decent along the coastline to sea level, the best descent of the trip.  At the bottom we pulled into a campsite which had the perfect spot for our tent amongst some olive trees. And we found a private boat to take us to Hvar. Phew.  First thing we did was ditch our bikes and head for the ocean for a sunset dip, washing off the dust from the day and relishing in the warm water. 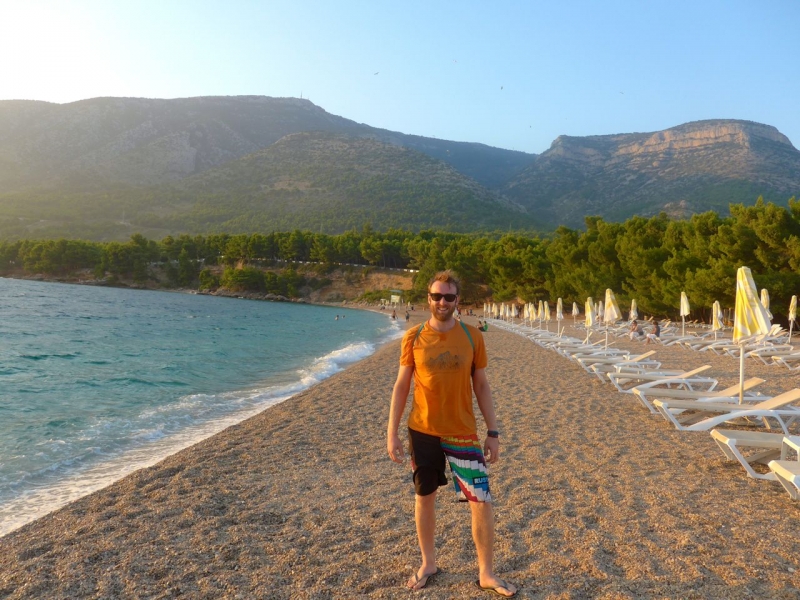 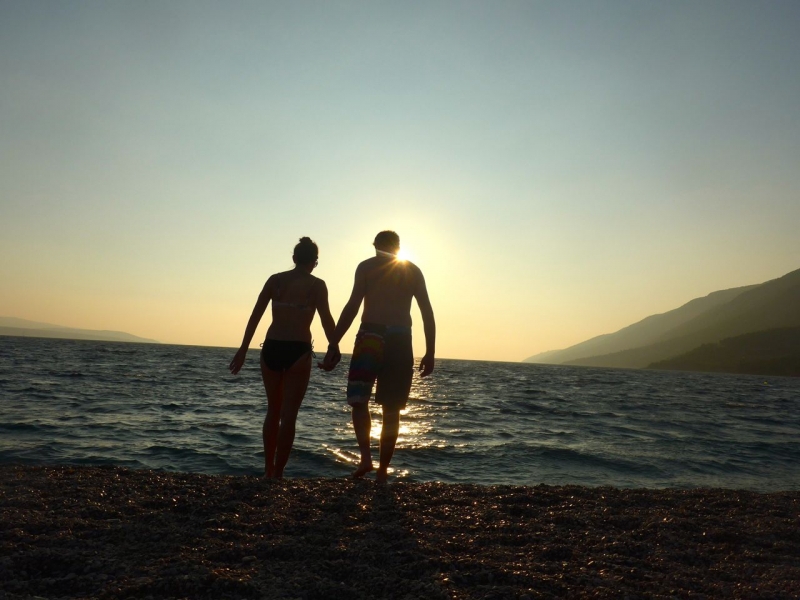 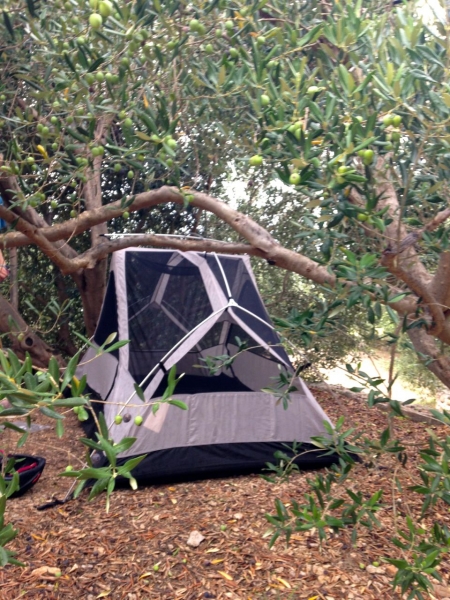 Croatia’s weather had been phenomenal, but our luck had to end somewhere, and it was holed up in a little apartment with tomato soup and grilled cheese as incredible amounts of rain fell almost all day.  A short break in the sky leak let us take a few photos of this picturesque place. 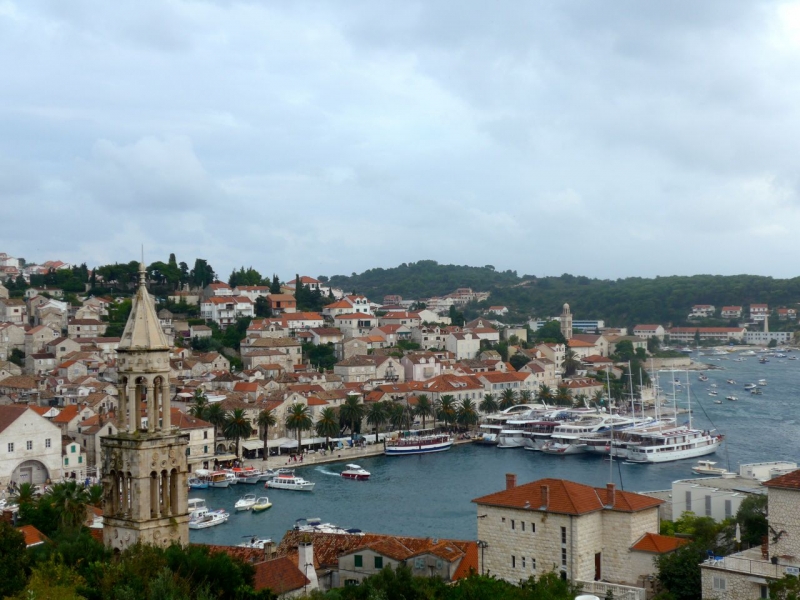 We love the white stone houses with the red roofs. 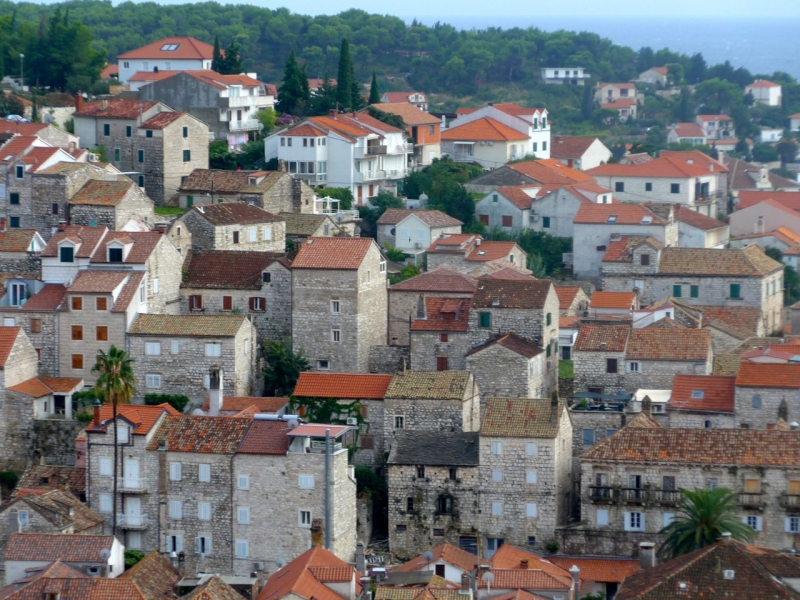 And lucky the rain didn’t burden us cross the island to Starigrad, Jelsa and ??.  A beautiful ride there with few cars, a bit of climbing but worth it for the great view.  We found more quiet and pretty coastline there. 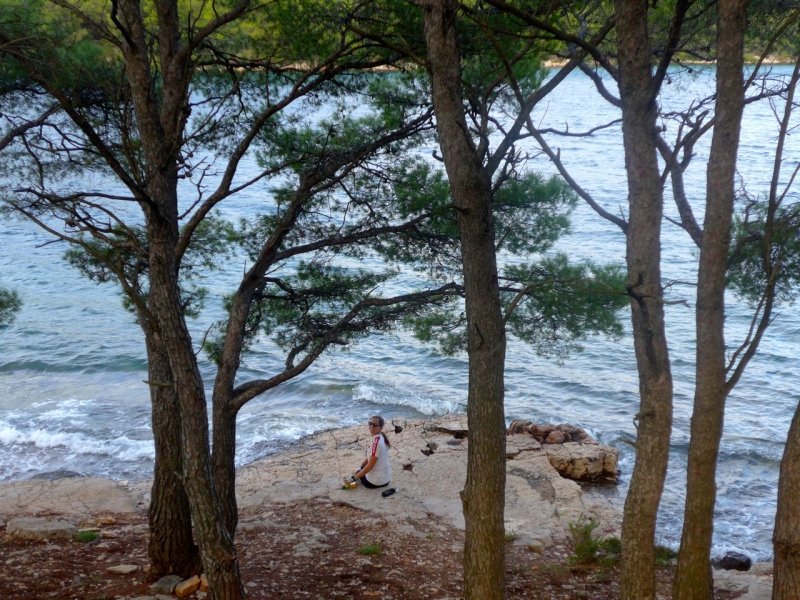 On our next ferry we met some fellow Canadians who were spending a week biking in Croatia for their honeymoon!  We found accommodation together at a character of a Croatian’s guesthouse then biked to a great beach and cooked some delicious barbecue. 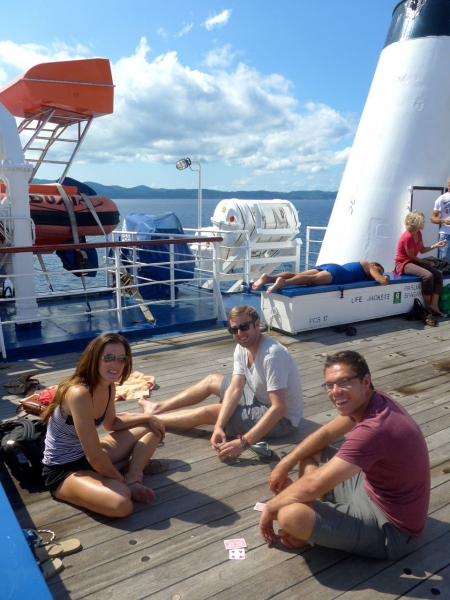 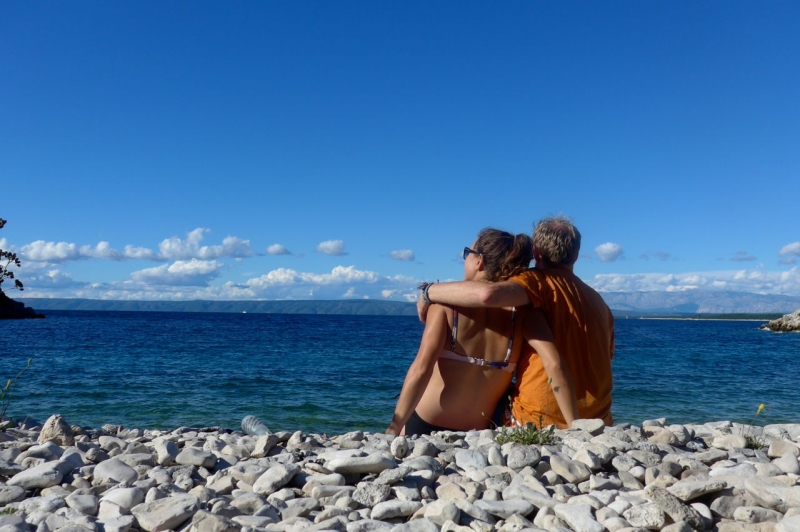 On Korcula we met up with a family friend Gwen, so nice to see a familiar face.  Finally we tore ourselves away, taking a short ferry to the peninsula and biking for two days until we reached Dubrovnik.